From: ‘The Adelaidean’ (Adelaide University)

AFTER the events of September 11, it’s not hard to imagine a world in which those who represent freedom and democracy are threatened by a source of great power and evil.

It’s a feeling that was shared, no doubt, by those who lived through or were born during World War Two, the people who were the first in history to read a book that many now regard as one of the greatest stories ever written.

Since its publication in 1954-55, The Lord of the Rings by JRR Tolkien has endured as a tale of heroism in a world of increasing darkness. Although a “fantasy”, its themes of good versus evil, the changing nature of the world and heroism are still just as applicable to Western society today as they were half a century ago.

This month The Lord of the Rings, considered the grandfather of modern fantasy literature, comes to life on the silver screen. One fan lining up at the box office to buy a ticket will be PhD student Kerrie Le Lievre, from the Department of English at Adelaide University, Australia.

Tolkien’s novel plays a major role in Ms Le Lievre’s PhD thesis, which examines a number of “high fantasy” novels and the themes common to them all. Her thesis is titled Worlds and Mirrors of Worlds, and explores how fantasy writers use the secondary worlds they create to critique and challenge the dominant paradigms of modern Western society, and to provide alternative models. The other novels dealt with are the Earthsea trilogy by Ursula K Le Guin and The Riddle-masters’ Game by Patricia A McKillip.

“I’m working on a close reading of the three high fantasy texts,” Ms Le Lievre said. “Because they’re all high fantasies, they’re all closely related in terms of their structure and the issues that they deal with, and there’s also a sense in which both Le Guin and McKillip can be seen as writing back to Tolkien; they both took inspiration from The Lord of the Rings and started thinking about it in different ways.”
For the uninitiated, The Lord of the Rings is divided into three books: The Fellowship of the Ring, The Two Towers and The Return Of The King. The first of these will be seen on cinema screens around Australia from December 26, with the others to follow in 2002 and 2003.

Fellowship tells the tale of Frodo Baggins, a Hobbit (about half the size of a normal man) who discovers he possesses a ring of great power. This ring is being sought after by the evil Sauron, a dark lord who hopes to rule over all of Middle-Earth (the fictional “secondary world” created by Tolkien). With his friends and with the help of the wizard Gandalf, Frodo leaves his home and seeks to rid himself of the ring. He is then entrusted with the mission of destroying the ring, and to do so he must enter the very heart of darkness itself: the land of Mordor where Sauron lives.

In its most basic form, The Lord of the Rings is a grand adventure, a tale of against-the-odds heroism. But Tolkien has created a world with such depth that scholars like Kerrie Le Lievre continue to search its text for theme and meaning. So strong was the influence of Tolkien’s novel that it can be seen again and again in other works of fantasy, even in the Harry Potter novels by JK Rowling. Like those novels, in its time The Lord of the Rings was also a huge commercial success.

“I guess you could say it’s been a mixed blessing,” said Ms Le Lievre.

“The first effect The Lord of the Rings had on the general field of fantasy literature is that it separated it from the body of mainstream fiction. The precursors of Tolkien’s work, authors such as Lewis Carroll, William Morris, Robert Louis Stevenson, wrote something that was generally called “romance”, but it was also part of the mainstream. There was no sense in which Stevenson’s romance writings were considered different from his more mainstream or gothic writings.

“The problem is that a lot of the imitations weren’t the best; they tended to understand the rough shape of Tolkien’s creation but missed the subtleties and complexities that Tolkien built into it. The Lord of the Rings does have a very replicable form, but it combines that with a unique and extraordinary content that nobody has been able to surpass,” she said.
While Tolkien claimed that his work was not specifically a retelling of World War One or, even more likely, World War Two, he is on record as saying the issues and themes dealt with in his works were applicable to the modern world. 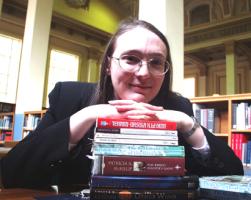 Caption: Kerrie Le Lievre with some of the fantasy novels she’s examining for her thesis. Photo: David Ellis.

“Many of the issues that were current in Tolkien’s day remain current today,” Ms Le Lievre said.

“Things like industrialisation—that was definitely a big one. Mordor as a culture or as an image is very much to do with industrialisation. There are also issues to do with the environment, damage to the environment and how the world is changing because of the industrialisation process; with the changing nature of evil and how that’s perceived in the world; with the need for a different model of heroism, one that doesn’t focus on a central hero but becomes a shared sense of heroism; and related to that are the issues about our sense of community and a shared responsibility for the world.

“Tolkien’s rethinking of the nature of heroism in the modern world is one of the most important strands of The Lord of the Rings,” she said.

“A lot of his heroes look like old-fashioned epic heroes striding off into battle with swords and so forth, but really they’re not. Tolkien’s heroes are always collective, so the journey into Mordor isn’t just about Frodo, it’s about Frodo, Sam and Gollum working together as a unit. At the same time, the other strand of the story isn’t just about Aragorn; although Aragorn is the hero he wouldn’t be able to function without Legolas and Gimli backing him up. And there are many other characters added into the mix, each from different races of elves and men, dwarves and hobbits. So it’s not just an individual who sets things right, it’s a group of people who stand against an incoming enemy or a moral wrong. They all play an important role in the scheme of things, and without their collective effort the heroes, plural, would not win through to the end.”
While the upcoming film of The Fellowship of the Ring will not have any bearing on Ms Le Lievre’s thesis, like many Tolkien fans and scholars she is both enthusiastic and reserved about her feelings on the film.

“I’m approaching it as though I’m going to see a particular production of a play. When you go to see a performance of Hamlet it’s always going to be somebody else’s Hamlet, not the one I have in my head. So if you see the movie of The Lord of the Rings you’re seeing one interpretation of it.

“A lot of the changes that I’ve heard of [from book to screen] seem to make sense according to the logic of film. I’m comfortable with what I know about the film so far, but I’m suspending judgement until I see the results,” she said.