“The world is divided into those who have read The Hobbit and The Lord of the Rings and those who are going to read them” The Sunday Times.

December 2001 sees the first Lord of the Rings film hit the silver screen and, in conjunction with new Line Cinema, Games workshop is proud to be releasing the first of its battle games for these awesome films.

Games Workshop was kind enough to send me quite a few LOTR miniatures, I can’t seem to find any miniature gamers to do a review with, but I’ll start giving my impressions on the products.

First off, “The Lord of the Rings Strategy Game”. This is the Starter set. It comes with a very cool 128 page rulebook (read Tookish’s review of it here), 48 miniatures, some scenery and 4 dice. The whole set will cost you $40. Now for a breakdown of the various stuff in the set. 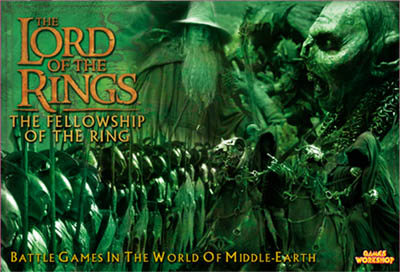 The Rule Book:
The rule book is just awesome. 128 pages filled with figures, strategies, rules, tips and pics from the movies. I got to take a look at the book at DragonCon and that was what had me most excited about the set. The book is just that awesome, take a look at Tookish’s review for more in-depth info.

The Miniatures:
The set comes with 48 plastic miniatures. 24 Moria Goblins: 8 Archers, 8 Spearmen and 8 Swordsmen, 16 High Elves: 8 Archers and 8 Swordsmen with those funky looking swords of theirs, and 8 Men of Gondor: All Swordsmen. The miniatures are pretty detailed for tiny little things. I’m clueless when it comes to painting, so I’m leaving that part alone for now. The men of Gondor and Moria Goblin swordsmen come with detachable Shields too, how cool is that.

The Scenery:
It’s a ruined building, well, a couple of broken walls, nothing spectacular.

Dice:
The biggest disappointment about the set was the Dice. They’re just your average six-sided, run-of-the-mill black on white dice. They could have done something with them to spruce them up a little, different colors or a ring representing the one or something. They are just so… plain.

So in conclusion, this set is pretty cool, the Rule Book especially just blew me away.

Next, the “Attack at Weathertop” boxed set. This set comes with the four Hobbits, Aragorn, five Ringwraiths and scenery. 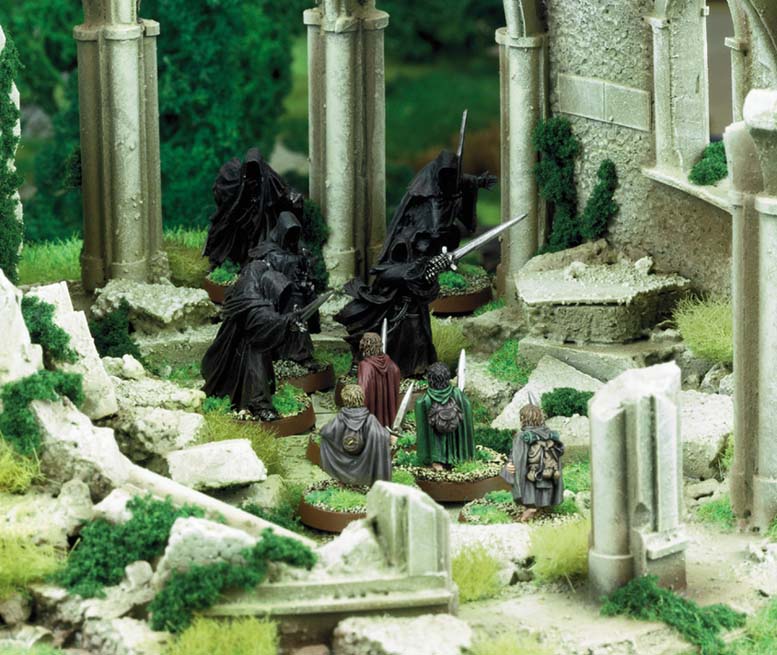 The Scenery:
A camp fire… Not very useful, but it looks kinda cool.

In Conclusion:
A good set if your a Nazgul or camp fire fan 🙂 Aragorn and the Hobbits you can get in the Fellowship of the Ring boxed set.

I got a bunch of Blister packs too. First off, there’s Saruman. He comes with his Staff in one hand and the Palantir in the other. Pretty cool looking.

Then there’s the Cave Troll. No pic unfortunately, but rest assured, he looks mean. You can see him in the latest trailer, trying to smash Sam into goo. He’s the biggest miniature of all the Games Workshop stuff I have (except for Gwaihir). He has his wicked looking club in one hand, and his chains in the other, not to mention a really mean looking face. He comes in six pieces because he is so large (either that or he didn’t handle the trip from the UK to the States too well), I haven’t been able to glue him together yet. even so he is one of my favorite miniatures from the LOTR collection.

That’s it for this series of Reviews, look for more in near future, including a gameplay review, if I can find someone to play the game with. Check out our collection of Games Workshop images here.