The White Lady of Rohan, a Barliman regular, had a unique chance to met up with Billy Boyd after seeing the Traverse production of THE BALLAD OF CRAZY PAOLA, playing in the Tron theatre in Glasgow.

She sends in this report:

Billy Boyd as you may know plays the character Pippin in the up coming movie Fellowship Of The Ring. He is a highly accomplished actor projecting the depth and spirit of character thoroughly. When he strides across that stage his ownership of the part becomes clear as he delivers his lines. You believe him. You believe he is the character by his mannerism, tone of voice, and stance.

Yet who is he off stage. Well, my friend Alice and I were sitting in the bar when who should walk in but Billy Boyd. We were struck by how down to earth and real he seemed. Some people approached, asked for his autograph and he graciously signed for everyone. Unlike some actors who try to distance themselves, he seemed very warm and agreeable to those who approached. 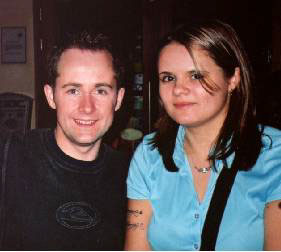 I sent my friend Alice over to get my toy and postcards signed. Alice, I must admit, was a very good sport. Before our trip to Scotland she had no idea who Billy Boyd was, let alone who the character Pippin was in the book Lord of the Rings, nor why I would travel across nearly the entire country to see a play. I’m sure she has heardenough of my babbling by now to be able to recite the entire book herself! After Billy struggled for several minutes to get the pen to work, he signed everything for us.

When I went over, I mentioned how before the show I wasn’t sure how good he would be in the role of Pippin since I had only seen him in Urban Ghost Story in which he played a loan shark. I told him that now that I saw him in the play, TBOCP, there were no doubts in my mind. Even though the character he plays was totally opposite to the character Pippin, he was brilliant and I was now absolutely sure he would be great in the movie FOTR. He thanked me and mentioned that I had only seen him in projects in which he portrayed nasty characters. He later said that one of the reasons he took the role in the play was that he had spent eighteen months being nice as Pippin.

We talked about a few things, and I did remember to tell him that Stewart, the administrator on his official web site at www.bilyboyd,co.uk said to say hello. He said oh yes, Stewart had mentioned that I might see the show and we spoke briefly about his web page. If you get a chance you must take a look and do listen to his interviews, they are precious. Alice asked for a photo and he let us take one.

Naturally I had to ask him about his tattoo and had to ask to see it! He said he couldn’t show it because it was a secret. I said it wasn’t really a secret because I knew what it was and where it was! He laughed and asked me where and what it was. And when he heard my answer (I was right of course) went “oh!” Then he said, “oh well, seen as you came from Northampton,” and promptly showed us the tattoo! It is very cool! I then rather enjoyed showing him mine (the ring inscription around my arm)

He had to step away to talk to some other people that he knew but came back about ten minutes later and brought Stewart over to meet us. Stewart stayed with us as Billy went off to chat with some of his friends for awhile. When he came back, he offered us a drink, which was impressive.

We were just about to get kicked out of the bar for closing time, when I realised I had completely forgotten who was playing Theoden. I had been trying to explain all the characters and the actors who portray them to Alice but had forgotten who played him. I asked Billy and he stood there and said, “erm. Theoden, hmmm, yes it was . . .” At this point I started teasing that he didn’t know which character I was referring to and his reply was “yes, I do. It was a very talented actor called . . .” After thinking for a minute or two he went, “erm . . . Which ones Theoden again?” I couldn’t help but laugh! After I explained which one was Theoden, he laughed and said, “oh yes, it was Bernard Hill.” It took him a while to remember but bless him he did.

We had to leave as it was closing time so we said our farewells. He headed for his taxi and we headed back to our hotel very happy. I had met an incredible person who was gracious, kind and warm-hearted and was now goinghome with my signed toy and postcards. I will treasure my memories of this trip for a long time (who cares about the bank balance). Thank you Billy!

Thanks for the report White Lady of Rohan! I had the chance to met Billy at Cannes this year, and you are right on the mark. He is one of the most down to earth people to get to know.