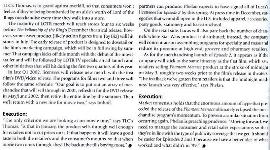 I found a LOTR article that you might not have access to… it’s in a great monthly magazine called Kidscreen. Kidscreen focuses on “reaching children through entertainment,” and always features articles/news about kids broadcasting, software, movies, toys, properties and other products. It’s not available at newstands; I get the magazine because I work for a FOX TV affiliate. In the January 2001 issue, they have a multi-page article about the upcoming merchandising for the LOTR movies (and Star Wars, incidentally). Although there isn’t a great deal of specifics, here’s some tidbits I pulled out:- nice list of signed licensees; some of which I knew about, some I didn’t (Toy Biz, EA, Topps, Decipher, Playmates, Applause)- the three films will all be PG-13, but much of the merchandise is aimed at kids 7 and up- DVD/video release will be 6 months after the movie opens- action figures could be in stores as early as July; most merch will be out a month before movie opensI’ve attached scans of the complete article so you can see for yourself.

Posted in Merchandise, Old Special Reports on January 25, 2001 by xoanon