Anyone who’s gotten interested in what inspired Tolkien’s imagination would like this project – it’s an animated version of Wagner’s gigantic opera cycle, The Ring – which also centres on a cursed ring. A potted version, using the main elements of the Nordic myth and accompanied by Wagner’s music without the singing. Intrigued? You should be. Cursed gold, dragons, swords and sorcery….done in 28 minutes. Initially it’ll be aired on BBC/Channel 4TV, I believe, as they’re backing it. The makers, Case TV, hope to make it more widely available as a video eventually. We’ll keep track of this project too…..something to watch while we wait for LOTR. 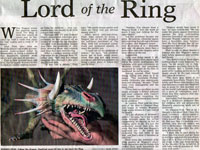