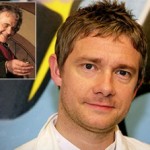 EW.com comes through today with an update to the Martin Freeman story…

Yesterday, the British newspaper The Sun ran a story saying that Martin Freeman (a.k.a. Tim from the original U.K. Office) had to decline an offer (and seven-figure payday) to play Bilbo Baggins in Peter Jackson’sHobbit movies due to a scheduling conflict: The actor was already committed to shoot the BBC seriesSherlock, in which he plays Dr. Watson. That’s all true, but according to sources close to the Hobbitproduction, it’s not over yet. New Line and MGM, the studios backing the Hobbit films, have since come back to Freeman with a proposed schedule that would allow him to shoot both projects. All parties are currently negotiating a deal.