One of my favorite Orc designs from any of the Middle-earth films got the Weta Workshop statue treatment late last year. We originally knew him as Azog, then Bolg, and eventually he became The Torturer of Dol Guldur, beating Gandalf the Grey up during The Hobbit: The Battle of the Five Armies Extended Edition. This guy is just brutal to look at, with metal on his face, armor made of bones, a massive mace, and blood all over. It’s an absolutely savagely superb piece! Sculptor Sam Gao, who we’ve come to know as someone who can brilliantly sculpt monsters, did it again. I hope you enjoy the review and I hope you get this piece, which is limited to an edition of only 500 worldwide.
END_OF_DOCUMENT_TOKEN_TO_BE_REPLACED 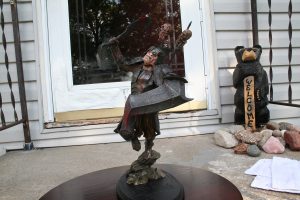 Just as fans were coming off the high of Comic-Con 2017, our friends at Weta Workshop introduced a surprise. The Dol Guldur Orc Solider covers a need in Middle-earth collector’s collections with a generic Orc soldier from The Hobbit Trilogy. This Orc is really fantastic,and superb, from the sculpting details down to the paint. Announced with an edition size of only 500 pieces this piece is going to be one of those that fans will have to hunt for years down the road, so I would suggest not sleeping on acquiring this piece.
END_OF_DOCUMENT_TOKEN_TO_BE_REPLACED 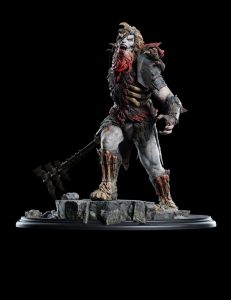 Our friends at Weta Workshop have two new awesome pieces for us tonight and both come from the Dol Guldur sequence of The Hobbit: The Battle of the Five Armies. The first piece is The Torturer of Dol Guldur who Galadriel easily dispatches when she comes to help save Gandalf the Grey. This piece is freaking awesome! You can see lots of great detail, paint, and it just looks nasty. Fans are not going to want to wait too long to get this Orc as he has an edition size of only 500 pieces. He comes in with a price tag of $449 but you have time to save as he doesn’t ship until January of 2018. Bolg is an impressive statue with some gruesome metal implanted into his body. All the fanstastic details were put there by the talented Gary Hunt and Greg Tozer. Bolg has an edition size of 1000 pieces world wide and comes with a price tag of just $279, which for something this size, detail, and paint is a really good deal.
END_OF_DOCUMENT_TOKEN_TO_BE_REPLACED