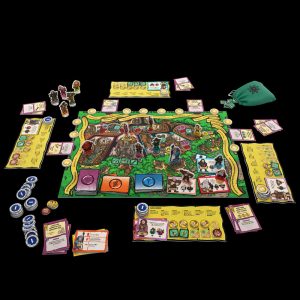 Here’s a great Q&A with Daniel Falconer who, you all know, worked on both The Lord of the Rings as well as The Hobbit Trilogies.

How did your experience working on The Hobbit and Lord of the Rings trilogies influence your design for this game?

While working on the films the Weta Workshop crew and I all got to know The Hobbit characters and world very well. Though fictional, these characters became very real for us. That familiarity meant they were almost like friends to me – and it was fun to think about and hang out with them. During quiet moments I’d sometimes draw cartoon versions of the characters just for kicks. In the back of my mind there was always the thought that perhaps those silly little drawings might eventually become something more, but it wasn’t until years later, once Weta Workshop started developing board games, that the outlet for this became apparent.

My fellow designer Paul Tobin and I sat with Nicola Booth, who at the time was overseeing table-top game development at Weta Workshop, and we brainstormed ideas for what a possible game based on The Hobbit might look like. There had already been many games of all sorts based on Middle-earth, but almost everyone focussed on the conflict and big, world-changing aspects of the stories that author JRR Tolkien had created. We wanted to do something different: something smaller and lighter in tone, that would be a short game suitable for families to play together. Very quickly we zoned in on the unexpected party that happens at Bilbo’s house at the beginning of the story. The many unique Dwarves and the mischief they get up to seemed like a great fit for the tone of game we wanted to make and was one of the more memorable scenes from the first of The Hobbit films. It also lent itself to being interpreted in a cartoony way, which we thought would help give the game a bright, colourful sensibility, rather than something which was illustrated with moody movie stills.

What was your role on The Hobbit?

I was one of Weta Workshop’s conceptual designers on The Lord of the Rings and picked up the same gig on The Hobbit a decade later. It was our team’s job to suggest ideas to the director for how the characters, weapons, armour and creatures might appear in the films. We produced literally thousands of drawings and 3D concepts that Peter Jackson would look through, pick ideas from and give feedback on. The whole process on both film trilogies lasted for years, so I have been living and breathing Middle-earth for a large chunk of my life!

Why did you decide to design this game in the style of Weta Workshop’s Mini Epics range?

My talented colleague Mauro Santini had already established his own fabulously fun aesthetic interpretation of Middle-earth with the Mini Epics figurines, and Weta Workshop is selling these as an ongoing collectible range. The design style was already very close to the kind of thing I had been drawing for my own entertainment, so it made sense to pull in behind the Mini Epics brand and embrace the same look for our board game. The Mini Epics were the perfect blend of irreverent humour and stylisation, and as a fan of them, it was a pleasure for me to try to emulate Mauro’s style.

Why the big, bright, bold colours?

Bag End and the Shire are super colourful and cheery, so the game demanded to be colourful! Colour is an important visual tool in a board game because it can be used to call out different characters or elements that have specific and unique functions in a game. The Dwarves were described as each having their own distinct hoods of varying hues in the book, and when designing for the films we leaned into this, giving each Dwarf their own colour palette. On screen it was subtle, but we exaggerated the colour differences and intensity so that the characters would pop visually even in miniature on the game board.

What did you really like about working on this game?

One thing I really like about the game is that it actually has a moral story. As a parent, I love it when there’s a good message for my kids in their entertainment. On the face of it, it’s based on a funny sequence in the movie where the Dwarves tease Bilbo and trash his house, but it’s actually something else entirely. Bilbo frets because he thinks they’re destroying his stuff, but the Dwarves are actually cleaning up after themselves, albeit in a way that also tickles their mischievous natures. While Bilbo can’t see past his worries about his orderly and predictable existence being disturbed, in truth the Dwarves are having fun under the watchful eye of Gandalf, who has plotted this whole experience as a learning opportunity for the Hobbit. And underscoring the message of keeping things fun and lighthearted, respecting Bilbo’s limits are actually designed into the mechanics of the game: the Dwarves win by keeping Bilbo curious rather than furious.

How did you design the board to look like Bag End and/or match the film set?

Bag End’s design is so iconic. Watching the films, it’s so enticing. I always wanted to explore it or move in! I was lucky enough to visit the sets during production and get to wander around inside, briefly. There is something so magical about those big round doorways. I didn’t want to leave! So, moving about and exploring Bag End was always going to be part of the game experience. In gameplay, you as the Dwarves go from room to room, staying ahead of Bilbo while you match items and lyrics to build the full song that they sing as they clean up after dinner.

So, how to translate the character of Bag End into a game board? In strict plan view you wouldn’t see the round doors or get to experience the flavour and character of Bag End fully, so I chose to illustrate it with a tipped perspective, and cut away the hillside so that we would be able to view the iconic exterior, with all of its windows and round door, but also see inside each room.

What elements or props from the actual film set did you include in the design?

Having access to such wonderful reference materials behoved me to use as much of them as I could, so all of the stuff that clutters Bilbo’s home in our game board illustration is based on actual set dressing from the films. It was really cool including elements barely visible on screen, like the tree roots of the great oak that grows above Bag End coming down through the hall, the tiny portraits of Bilbo’s parents over his parlour fire place, the bird house in his yard, or the distinctive backs of the chairs in his kitchen.

Did you try to capture the personality of the Dwarves in your illustrations?

When we were designing the Dwarves for the films, Peter Jackson was emphatic about wanting each one to be distinctive. It was important that the audience be able to distinguish them easily, so that led us to lots of extreme beard and hair experimentations, as well as props and costume elements that might suggest specific roles or talents in each individual. Each Dwarf had to be recognisable in silhouette.

Those same needs were equally applicable when it came time to adapt the Dwarves for our game. Because they’d be small on the board, and because caricaturing is a hoot, we emphasized those unique visual elements on each character. Extreme beards or hair became even more extreme, colours were dialled all the way up, and any unique shapes exaggerated. Dwalin was always the most broad-shouldered Dwarf, so I took that to eleven, making him wider across the shoulders than he was tall; Balin had a long beard, so I grew it to his knees; a little flick on a shoe toe became a big curl, or a tuft of fur a mane, all to make each character both distinctive and funny.