With the release of The Two Towers on December 18, 2002, TheOneRing.net’s Movie Discussion Board members continued the fun of gathering geeky observations for our TT list just as we did for FotR and RotK… and eventually for the 3 Hobbit movies; but we have about 11 more years to wait before they get properly reduxed 😉

As it happened with the FotR Geeky Observations List, the TT contributions began with the release of the trailers.  We members poured over every frame and every utterance driven by the excitement of anticipating the movie’s imminent release.  After we eventually got the extended DVD, we could really scrutinize every moment until the TT list grew to 468 items, with more to add!

Here are some examples of observations (lists do not include pictures): 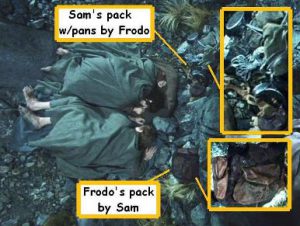 While Sam and Frodo are sleeping and Gollum crawls down the mountain, their backpacks are on the wrong sides.  Frodo is sleeping next to Sam’s backpack and vice versa.

There is a stool to the left of Théoden’s throne that is brought around to his right and used first by Gríma when the Fellowship arrives and then by Gandalf. 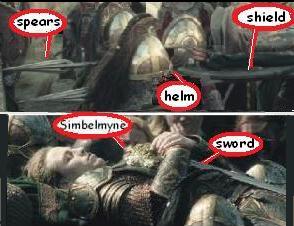 Théodred is buried with his helmet placed at his feet, holding his sword and also holding Simbelmynë in his hands.   Théodred’s bier is made of shields lying across two long spears.

As with all of the geeky lists, one of the changes I made to the premise of the original list was to exclude any nit-picky or negative items. Considering everything Peter Jackson and the hundreds of people who made these films possible went through to create these three movies at one time… something never attempted before… I just didn’t think it was right. Those observations were for others to collect.

Because these lists are still active and growing all the time, feel free to share your own observations. Find me on the Boards where you can also access all of these links and more in the footer of my posts on The One Ring Forums Message Boards.