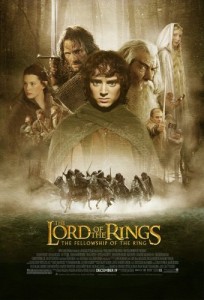 As hard as it is to believe for many of us, this coming Monday, December 19th, marks the 15th anniversary of The Lord of the Rings: The Fellowship of the Ring opening in theaters. To help celebrate, we’ll be looking back all this week at the news on TORN and other sites from before, during and after the release of this incredible movie that changed many of our lives and that, together with the other two films in the Lord of the Rings trilogy, has become a classic.

By this time in 2001, many of us had already purchased our tickets, some for the midnight shows. Many were preparing costumes and/or thinking up excuses not to go into work on the 20th (ahem). A precious few of us had even been lucky enough to have seen the movie before it opened (I wish). But, one thing we all had in common was the thrill and excitement of watching the trailers in the months leading up to the December release.

Re-watching some of the trailers again brought back a tinge of the excitement I felt when I spent hours watching the first trailer, on dial-up no less! Kids, you’ll have to ask your parents to explain. Yes, those were the days. To help all of you revisit that excitement, here’s a gem from 2014 posted by staffer Demosthenese: The ghosts of trailers past: revisiting The Lord of the Rings, complete with TORn staffers’ exclusive frame-by-frame analysis – well worth a re-visit even today.

The first teaser in theaters came out on January 12, 2001 and was only 1 min, 47 seconds long; but what a 1 min and 47 seconds! In it, we see the classic ‘money shot’ of each member of the Fellowship as they walk over the crown of a hill in the wild. Gandalf leads the way and as each of the others follow we see the titles appear: The Fellowship of the Ring – Christmas 2001; The Two Towers – Christmas 2002; The Return of the King – Christmas 2003. The sublime subtlety of The Return of the King title appearing as Aragorn topped the hill was lost on no one who had read the books.

The second trailer was released on May 25th and clocked in at a fulfilling 2 mins, 27 seconds. In it, we learned quite a bit about the One Ring and, oh my goodness, got our first glimpse of *gasp* Sauron! Oh, the rumors and hours of discussion that ensued, not to mention the hubbub caused by seeing Arwen for the first time!

The third trailer, which premiered on television in front of Angel in September, gave us our first, glorious glimpse of The Shire and Bag End. “Fate has chosen him…. a Fellowship will protect him… evil will hunt them ….This Christmas the legend comes to life.” How many of us had that memorized? The other biggie in this trailer was seeing the tip of the fiery foot of the Balrog; que more endless hours of rumors and discussion!

We hope you enjoy watching the trailers again, and taking a walk down memory lane with us this week!