Product Review: LEGO® The Lord of the Rings “Attack on Weathertop” “…in the first days of the North Kingdom , they built a great watch-tower on Weathertop, Amon Sul they called it. It was burned and broken, and nothing remains of it now but a tumbled ring, like a rough crown on the old hill’s head. Yet once it was tall and fair. It is told that Elendil stood there watching for the coming of Gil-Galad out of the West, in the days of the Last Alliance.”

The Attack on Weathertop set with its 430 piece count, is a relatively easy build compared to some of the other larger sets like LEGO’s The Mines of Moria and the massive Helm’s Deep set, but that doesn’t mean it isn’t fun. The bigger sets require a larger time commitment and sometimes it is nice to actually finish a set within a day. To watch Peter Jackson’s The Lord of the Rings movies and witness Middle-earth come alive is a life long dream for most Tolkien fans, but to actually be able to hold or construct a piece of Middle-earth with your own hands is an incredible feeling.

This set comes with 4 separate bags each labeled to correspond to the actual set piece you are building. The instruction booklet contains 82 full color pages of step by step directions and pictures of some of the other LOTR sets and an advertisement for the LEGO LOTR video game. It also has some very useful extra pages as well. There is a full page parts list that shows every single piece of this set, how many are in the set and what their part number is, so if you lost one you could go to a LEGO outlet and possibly pick up the missing piece. The booklet also has 2 full pages of every minifigure from the entire LOTR line of sets and which set these minifigures can be found in. Included within the set is a LEGO brick separator, which is extremely helpful for taking apart some of the thinner bricks that are stuck together. For little or younger hands this is a must. I can not tell you how many times my children ask me to separate their bricks. Now they will be able to do it themselves. You can go to the LEGO.com website to learn how to use it. To give you a little background, I have been building with LEGOs as long as I can remember. I think it all started when I would make fortifications for my toy soldiers out of LEGO blocks that were stolen…er…”borrowed” from my older brother’s sets. I would construct these elaborate networks of fortified foxholes, pillboxes and ramparts. In my mind I was building a U. S. version of the famed Maginot Line. That was what was so great with LEGOs, any child, teenager or adult could build anything, it was only limited by their imagination. Over the past few years I have written LEGO customer service more then once, imploring them that they were “missing the boat” on these sets and there was a huge fan base and they would be incredibly popular. I would like to think that I had a hand in getting LEGO to manufacture these sets.   Oddly enough, I still have not heard back from them thanking me for what a great tip that was. Like all the other LEGO LOTR sets, the box is awesome. The front of the box has a big picture depicting what the completed set looks like with the minifigures in action. The back has more wonderful pictures showing the set builder a multitude of ways he or she can enjoy playing with the minifigures.

This set contains Frodo, Merry, Aragorn,  2 Ringwraiths and 2 black horses. For these LOTR sets, I believe this is the first time LEGO has cast a one piece horse. They look great with red beedy eyes befitting them as steads of the Black Riders. Aragorn looks great and he comes with a two faced head. The one side is “Hey I am a cool Ranger”, the other side is “angry don’t you know I am Isildur’s heir” face. Merry”s head also has two faces which are, “smirking I just played a joke on Frodo” and “angry I cant believe the Ringwraith took the last of my Longbottom leaf”. Frodo’s has two expressions as well, “serious what am I doing here Frodo” and “terrorized holy crap that Ringwraith is coming at me…here…someone take the ring”. My only complaint is there are no faces on the Ringwraiths, I know they really don’t have any, but having red or white glowing eyes peering out of the hood would of looked scary and cool. Helping me to build the set I had secured the help of my son, Justin who is 9 yrs old, and my daughter Samantha who is 7. I normally call the mischievous duo “Frick and Frack”, but for today’s purpose and in the spirit of LEGO I will refer to them as “Brick and Brack”. Brick has been building LEGO sets since he was 6 and Brack is a comparative newbie doing it for about a year now. Just as fellow TORN staffer MrCere did with his sons on his Helm’s Deep build, we started out taking turns, letting each person finish a step by themselves.  We got thru the first bag of pieces in no time and we were halfway thru the second bag before Brick could not take it any longer and had to play with the Aragorn minifigure. Within minutes Brick was gone with Brack close behind and Aragorn was introduced to fellow LEGO minifigures Batman, Robin, Mr. Freeze, Captain Jack Sparrow, Indiana Jones, and all the characters from Star Wars. I actually think I heard Darth Vader and Yoda arguing how powerful “the force” was within the Ranger. Anyway, I finished the set myself and was done in a little over 2 hours. It was fun and I always enjoy starting to see the build resemble the pictures on the box. The set essentially is the remains of an old tower. There are two levels, with the lower chamber housing some old ruins and weapons. A set of steps lead upwards to a large platform surrounded by crumbling walls and fortifications. The design on some of the brick work is very detailed and looks great.  There is also a little outcrop piece of an old stone wall and a bush to the side. The action that takes place on Weathertop in the books and in the movies are such an integral part of LOTR. It is the closest Sauron comes to gaining possession of the ring and Frodo is almost killed. Somehow LEGO does a good job of making a set that captures that. You can envision the peril Frodo finds himself in with no where to go and Ringwraiths all around him and his friends.

The Weathertop set is also cool in a few ways. First, it has a trap door on the top of one side (not sure why Frodo would not use this to escape when attacked by the Ringwraiths). Second, the set can open and close as it swings on a set of hinges. It changes the layout and gives a child a lot more variations on how to play with it and where he can position the minifigures. It also stores easier when closed. Third, I love the spiral staircase, LEGO engineers never cease to amaze me how they can make something that could be difficult to build come out so easy. As you can see from the pictures it is not a big set but still offers a lot of play value for the money. One of my favorite things about LEGO sets are all the accessories that are included with any set. Even though this is a mid priced set, it still comes with some fun pieces for children to play with. There is a carrot, apple, a bag with a big turkey or chicken leg in it, a fire and pot to cook the food. Also included are seven swords, some spears, a rat and the coolest aspect of the whole set, 3 gold rings. It is nice that extra rings are included since it is inevitable that Frodo is going to lose a ring or two and now you wont have to hear your child cry that Frodo lost the One Ring.

I may be biased towards LEGO because I have been building them my whole life but I think they offer children and adults a lot of entertainment. This set is no different, it may be a bit pricey near $60 for only 430 pieces, but if you are a big LOTR fan like I am, it is worth it.   To me they are educational for developing young minds. To have a child look at a step in the instruction booklet, find the exact piece then put it in its correct position takes some skill and all the while it is a lot of fun for them. The minifigures really add to the value. Most kids really want to play with Frodo, Gollum or Gandalf and it is brilliant marketing on LEGO’s part not to sell the minifigures separately much to the chagrin of parents everywhere. Personally, I want the sets to go along with the minifigures, when I was a kid they did not have minifigures. I can not wait to get my hands on the new LEGO Hobbit sets.

See a full gallery of the build below.

The LEGO® Set is available at all major retailers and the following online stores: LEGO.com | ThinkGeek.com | WBShop.com | SideshowCollectibles.com 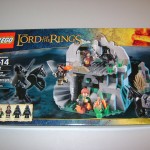 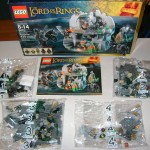 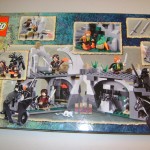 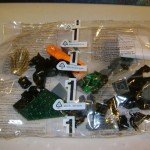 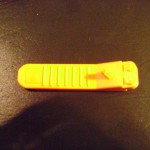 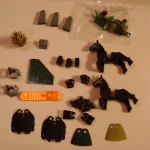 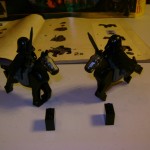 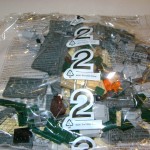 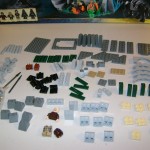 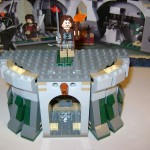 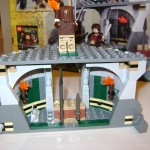 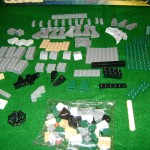 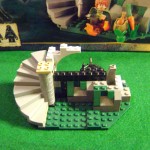 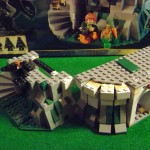 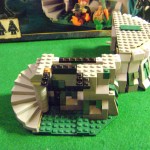 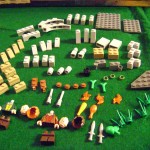 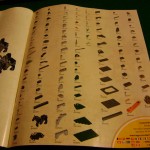 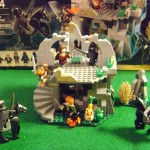 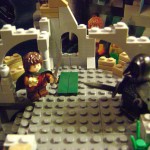 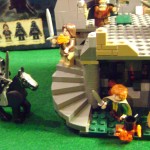 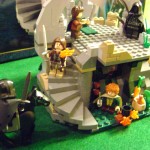 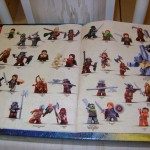 This story is posted in the following categories: LEGO, Merchandise, The Hobbit 1 Comment » . Please click on a category name to view all stories related to it.

One response to “Product Review: LEGO® The Lord of the Rings “Attack on Weathertop””