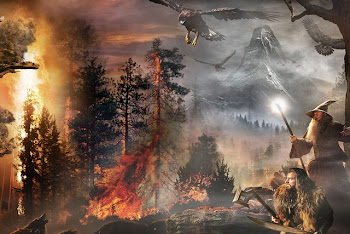 So, you’ve heard all the latest rumours from The Hobbit. Some of them — like the ones about Azog, and Billy Conolly’s talk about Dain — are pretty out there. Not to mention the whole plotline with the Nazgul.

In the spirit of trying to see who could invent the maddest rumour, our staff have put their heads together to try and come up with the most unbelievable rumour of all.

Surprise cameo: Tom Bombadil and Goldberry! Jackson has been quoted as saying “Dammit, I’m going to put those two in somewhere!” They will appear as specials guests at Beorn’s house. Ed Asner and Kate Winslet are rumored to be in talks to play the two roles.

Radagast is the true source of corruption. A major scoop has revealed that the secret purpose of Radagast’s role in these movies will be to serve as the source for Saruman’s corruption and ultimate turn to Sauron in ‘The Lord of the Rings.’

Smaug’s elaborate costume! A costume? Yes, it appears Smaug designs are being heavily based on the dragon from Disney’s Sleeping Beauty, both in size and artistic form. Maleficent is widely regarded as one of the best cinematic dragons ever to grace a screen, one in which she was a two natured being: Maleficent the dangerous Sorceress and Maleficent the Dragon. With Benedict Cumberbatch voicing both roles in The Hobbit, it seems the idea has always been to have the Necromancer be the human form of Smaug. WETA is hard at work realizing how to emulate the original shapeshifting and still make this a unique creature design.

Even more Hot Dwarves! Peter Jackson has been actively recruiting male strippers from all over New Zealand to play Dain’s army. He claims that these dwarves will “put those soldiers from ‘300’ to shame”.

Gollum’s grisly meal. In an effort to show the darker side of Gollum, in a scene leading up to the iconic “Riddles in the Dark” sequence, we will see Gollum viciously kill and eat a wayward goblin in a scene so gruesome that it will guarantee the movie receives an R rating in the USA. Peter Jackson is reportedly very proud of this sequence, as it harkens back to his early directorial years of grisly horror.

Legolas duets with Lindir. After Billy Boyd and Viggo Mortensen sang in the Lord of the Rings movies, Orlando Bloom is keen to show off his pipes. Our spies tell us he has volunteered to go ‘tra-la-la-lally’ with Bret Mckenzie.

Prancing Pony product placements. We’ve heard from an impeccable source that the Dwarves will stop at Bree and drink out of light-up glass goblets in a subtle Burger King product placement spot.

Beorn’s new secret sidekick. Wuzzle, an animal like creature that can talk, will be rendered by CGI. Negotiations are underway to have Wuzzle voiced by Eddie Murphy. Appearing at Beorn’s house, Wuzzle will provide comic relief in the second film.

First film drama! Jackson has decided that Balin will fall off a cliff in the Misty Mountains, seemingly to his death. He will then reappear in the second film. “I like to have at least one character fall off a cliff in each film,” Jackson told our source. “It doesn’t mean they can’t come back,” he quickly added, noting that Gandalf, Aragorn, and Gollum returned after suffering the same fate. Philippa Boyens observed that: “Sometimes I think Peter’s greatest influences as a child were Ray Harryhausen, Zulu, and Wile E. Coyote.” 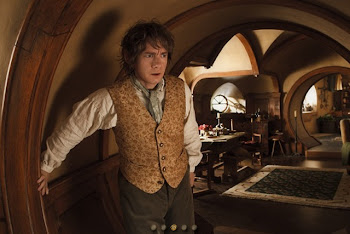 A Goonies homage! While trying to escape the Goblins, Bilbo will discover Gollum’s cave after falling down a Goonies-style waterslide in a tense three-minute ride guaranteed to thrill film-goers. Bilbo’s falling down the Goonies-style waterslide ties in with the future plans for a Middle-earth theme park in Orlando. Other attractions include a One Ring toss game and whack-a-troll.

Even more Cumberbatch. Due to the phenomenal popularity of Benedict Cumberbatch, Peter Jackson has decided not to confine him to motion-capture but to show him onscreen. He will play Elrond’s twin sons, Elrohir and Elladan, in Rivendell scenes and at the Battle of Five Armies. Weta Digital is updating the head-replacement technique used to allow Armie Hammer to play twins in The Social Network. When a reporter pointed out the twins do not figure in Tolkien’s The Hobbit, Jackson replied, “Well, they’re in The Lord of the Rings and we left them out of that, so it’s a fair swap.”

So. Many. Cameos! In order to get most of the cameos done in one grand sweep, Peter fills the distant shots of the Dwarves, Bilbo and Gandalf with Katie Jackson, Billy Jackson, Philippa Boyens, Dan Hennah, Andrew Lesnie, Richard Taylor, Peter King, Alan Lee, John Howe, Gino Acevedo, Howard Shore, Christian River, Daniel Falconer, with Fran Walsh as Gandalf and himself as Bilbo. We think this explains the screwy horizon silhouette a lot!