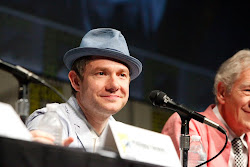 Andy Serkis says Martin Freeman was unpredictable on the set of The Hobbit: An Unexpected Journey.

Serkis insists Martin is “brilliant” at being directed, but he also enjoyed putting his own stamp on the character of Bilbo Baggins in the adventure movie.

Serkis -– who made his directorial debut as a second unit helmer in the film — said: “You just don’t know what you are going to get. Yet he’s brilliant at taking direction. There’s a rhythm that one works with Martin. He likes to try it his way and then you start saying, ‘What about this?’ When he gets it, it’s gold. And it’s so totally Bilbo.”