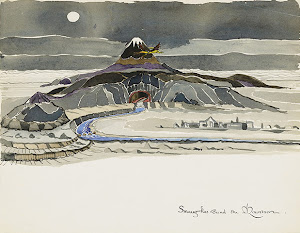 For JRR Tolkien, languages evolved at least in part in reaction to the history of their speakers. Looking at recent photos and screenshots of the cities of Dale and Esgaroth, I was struck by the thought that for Peter Jackson’s design team, Middle-earth history could exert a similar effect on architecture.

Curious how the architectural set design choices for the Hobbit might reflect the history of these two cities, I asked Barliman’s chat regular and archaeologist Jenniearcheo to provide a few professional insights on some of the set images that have found their way onto the internet.

This brief essay is the result. We hope you enjoy it.

A potted history of Dale and Esgaroth

As you probably know, in JRR Tolkien’s The Hobbit there are only two key places inhabited by the race of Men.

The first is Girion’s fabled city of Dale -— destroyed when the dragon Smaug sacked Erebor in the year 2770 of the Third Age. By the time Thorin arrive reclaims to reclaim his heritage, naught is left but ruins.

Then there is the Esgaroth, also known as Laketown. Built entirely of wood, Laketown stands upon wooden pillars sunk into the bed of the Long Lake. It lies south of the Lonely Mountain a few day’s journey from the Desolation of Smaug. It seems highly likely (but it’s never truly confirmed) that it was established by refugees from Dale. Certainly Bard’s presence is a strong pointer.

Although these two cities were both established and ruled by Men, their roots could hardly be more different. Dale, built on the wealth of The Lonely Mountain; Esgaroth, the product of Smaug’s devastation.

But how do we see these differences at work in the sets?

The architecture of Dale — the city of Girion 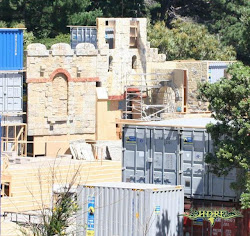 Beginning with the photos of pre-Smaug Dale, we see that the city seems to have been constructed with a Romanesque style. Romanesque architecture is inspired by Rome, and is characterized by round arches and stone materials.

In the second photo we can also see round-arched window spaces filled with pairs of round-topped openings separated by a colonnette. 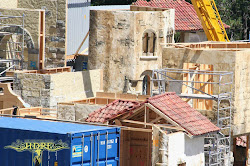 These are similar to the openings in the towers visible in the first photo in the linked page (of Maria Laach Abbey in Western Germany). To the left of this photo, we see an arched doorway of contrasting-colored stone, continuing (apparently) as a stringcourse or belt course of the darker stone. This is also very characteristic of the style.

For example, we have here the Colegiata de Santa Cruz in Cantabria (northern Spain), which has its origins in a Benedictine Monastery of the 10th century.

We also see more contrasting-colored arches and stringcourses picked out in what appears to be carved red stone, with a geometric motif. Also, pantile roofs abound. These are curved clay tiles, one edge of which curves under the next tile to interlock them.

In the screenshot to the right from Production Video 8, we have a grand formal building on the left, again with our stone blocks and round arches, and gray stone carvings on stringcourses. In the middle of the shot is a lovely building with a red arched stringcourse over a colonnade of 8 columns.

In several places, particularly in this production video, we see weathered stucco over some of the stone buildings, which speaks to a history of building, repair, and new construction. The large building to the left bears no stucco and may be of more recent construction than the central building with the colonnade.

This other screenshot below from the same production video shows the same scene but to the right of our colonnaded structure. Here we see many more pantile roofs, in a variety of shapes, including a fanciful pavilion on the wall to the right, topped with a finial, and with large sawnwork brackets picked out in green.

We also see several more sets of paired window openings, and a green sawnwork balustrade on a second-floor balcony near the middle of the shot, also painted in green. More weathered stucco is visible, and… well, we won’t mention the green tents. The video also shows windows filled with wooden lattice, and niches filled with statuary. All lovely details.

The Romanesque style is, naturally characteristic of the Mediterranean, which is very interesting.
While the Northmen who constructed Dale lived in what is presumably a much cooler climate than what is characteristic of Mediterranean states, it is a very formal architectural style which seems to fit Dale, and which had not been previously used in Peter Jackson’s Lord of the Rings movies.

Finally, we note the unusual round-arched merlons (defences an archer might hide behind, between the spaces or “creneles” of a crenellated or battlemented roofline). They appear to be tripartite, composed of two rounded blocks and a slightly projecting block. As you can see from the link, merlons came in many shapes.

But these are unusual and quite interesting. 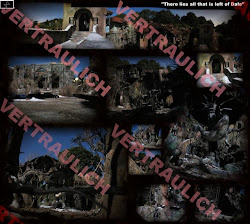 Turning our attention to the post-Smaug Dale composite photo to the right, we see that a dragon and 172 years have not been kind to our lovely city. Overgrown and with holes burned right through roofs, it’s only vaguely recognizable. But we do see some added architectural features not visible in the other photos.

There appears to be a robust wall surrounding the city, with apparently stuccoed guard towers with recessed entrances flanked by ornamental columns of some sort within recessed niches. There also appears, to the right of the image, to be some sort of statuary featuring a swimming duck and a chicken.

Clearly the people of Dale were a highly organized, formal society with professional architects, builders, and artisans who would have been required to maintain such a city.

Editorial note: Dale’s organisation and formalism is not surprising, considering Erebor was next door. Undoubtedly the dwarves were both a source of enormous wealth (via the mines) and expertise in building and stonework (its peoples). Wealthy people build in stone; it just lasts longer. Arches require technical expertise that the dwarves would have in spades.

What would the people of Dale trade in return? At the very least grain and other foodstuffs, for dwarves did little in the way of farming as Thorin himself says in The Hobbit.

The architecture of Esgaroth — the Laketown of The Master

Now let’s contrast this with Esgaroth or Laketown. Laketown was constructed entirely of wood, out on Long Lake, presumably on long, wooden piers sunk to the lake bottom.

The point was, apparently, to thwart Smaug. Should he return it would deny him a handy place to land and flame the town. Unfortunately, wood tends to be rather more flammable than stone or tile, but we’ll leave that to one side.

The architecture of Peter Jackson’s Laketown appears very whimsical in nature. Far removed from the formality of Dale, it looks as though no actual architects survived the destruction by Smaug, and that the refugees who constructed Laketown were composed of mere carpenters and builders. And possibly traumatized ones, at that.

If there is a style to Laketown, the photo on the right shows that it’s of medieval whimsy. Again, please ignore Miramar, the green screens, and… whatever those big things are sticking through the roofs.

There is a continuation of some round arches, particularly in the paired windows of the projecting bay of the building on the right, and the curving bridge between the two. But there’s a stylistic element to Laketown entirely missing at Dale. Dragon motifs. I suspect that the surviving builders who constructed Laketown could have done with some good therapy sessions. 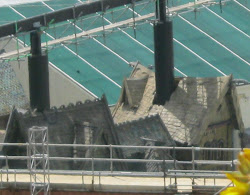 As we can see in the photo to the left, for example, the rooflines, which are drunkenly not straight, either by haphazard design or due to decay, feature ridge caps with an undulating dorsal ridge motif.

Indeed, the photo of Peter in the Laketown doorway shows a dragon-scale motif as exterior wall covering for the building. This motif was also used as an accent in that projecting second-story bay with the two windows we noted in the earlier photo. 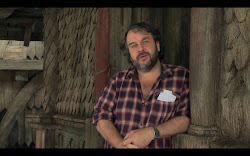 test link We do see some attempts at paintwork in that photo with Peter and in the one below where door surrounds have a bit of paint (likely it won’t be as bright on screen). But all paint appears fading.

It seems as if Laketown was constructed in an ad-hoc fashion. Its architectural style should be seen as vernacular, as opposed to anything formal. A few stylistic motifs are found, but these are whimsical in nature and might signal enduring psychological problems on the parts of the builders.

However, there’s another possibility. Smaug destroyed Dale over 170 years ago. If these structures aren’t maintained with any sort of regular painting regimen, and possibly occasionally burn down (I don’t see anything that looks like a well-constructed chimney, unless they’re going to turn those odd camera thingies in the roofs into chimneys in post), it’s possible that what we see of Laketown is a second or even third generation of the town. 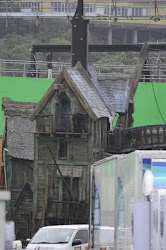 As a building burns or rots it might be replaced. And therefore, the dragon stylistic motifs might be seen as ironic. After all, in the book it’s only Bard who is worried about Smaug’s return, and tends to be the butt of jokes over his concern.

The lack of maintenance may also be seen as reflective of general neglect under the governance of the Master of Laketown.

Editorial note: Not only is the construction of Esgaroth haphazard, it’s built antirely in wood. A cheap, easily obtained, easily worked material for a people who yearn for the days when the river ran with gold. I agree with Jennie’s conclusion that the fading paint is signal of the neglect of the Master. Ironically, he is somewhat like Smaug, and hoards his wealth for himself.

I think it’s obvious that there’s a great deal of thought at work in reasoning out why the sets should look as they look. It’s not just a case of: “Oh, that would look cool!”. Middle-earth’s history plays a significant role in the development of how cities look.

Unfortunately, we’ve seen few clear examples of stonework from Erebor yet. It would be interesting to see what sort of links exist between the sets of Dale and Erebor. And Erebor was founded after the fall of Moria — how does the former evolve out of the latter in the minds of the concept designers?

In any case, it is clear that The Hobbit will be a feast for the eyes, and that great care has been taken to construct a distinct culture for each of the peoples within Middle-earth.

We have come to expect no less from Peter Jackson and his team.