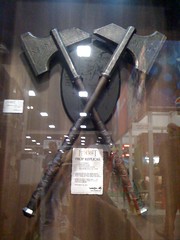 Over at Elendilion.pl, the folks of Gwaith-i-Phethdain, (which means The Fellowship of the Word-smiths) have been doing some linguistic research based on the latest close-up pictures of Dwalin’s axes and Thorin Oakenshield’s Orcrist.

Highlight the above to reveal some minor linguistic spoilers, then read on for some much bigger spy news!

The G-i-P folk also have a few pieces of very juicy spy news:

The news that the Wargs will speak is great news for readers hoping for greater textual fidelity from Peter Jackson’s adaptation.

On the other hand, Tolkien wrote that dwarves never “willingly” spoke Khuzdûl in front of outsiders (LOTR: Appendix F). While, in itself, it may be great to hear this language spoken, this is a bit of a stretch of canon — one obviously predicated on the nature of Bifur’s injury.

The dark elf, Eol, was apparently one of the few non-dwarves to have learnt Khuzdûl, although currently I can’t recall where/what book that was noted in. Curufin and the the folk of the House of Hador are also mentioned as exceptions in the Peoples of Middle-earth.

Update: Our clever forum members have also pointed out that the white wolf that Richard Taylor was seen atop in the last production video is almost certainly the chief warg!

Additionally, in the third production video, the cast talks length about having to speak dwarvish. This starts at approximately the six-minute mark. This could be construed as additional substantiation.

G-i-P is a linguistic website devoted to post-Tolkienian constructions in the “reconstructed” languages of Middle-earth. Neo-Khuzdûl is the work of Tolkien linguist David Salo. Salo created the inscriptions for Moria in the Lord of the Rings films and has also been asked to help with The Hobbit films.