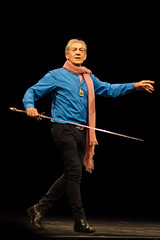 Ian McKellen just ended his run of fifteen one-man shows throughout New Zealand. The shows were raising money to fund the restoration of the earthquake-damaged Isaac Theatre Royal in Christchurch. Reports say that McKellen’s shows raised $354,000 for the theatre’s reconstruction.

Alongside McKellen’s fundraising, a Flight of the Conchords concert raised an extra $100,000, and British actress Miriam Margolyes also raised $10,000 for the reconstruction. Actor and writer Richard O’Brien made a personal donation to the cause.