Thanks to a storm in Chicago, we were not able to post your reactions and feedback to The Two Towers Extended Edition in a timely fashion. Better late than never, right?! Like our report on the FOTR Ex Experiences we are going to continuously update this particular post with your reports and images. Don’t forget to check out our Facebook page as many folks are directly posting to it with their experiences. Without further delay, click the ‘continue reading’ button to read more about experiences from fans throughout the US and NZ as they saw The Two Towers Extended Edition on the big screen for the first time! You can still buy tickets for The Return of the King Extended Edition through the following link, and don’t forget to order your copy of LOTR Ex on Blu-Ray! [TORn on Facebook] [Buy Tickets] [WBshop.com]

A great time was had by all this evening at The Two Towers showing in Boston.  Tamara, our line party organiser here in Boston, was present as folks arrived, handing out flyers to remind them to go to TheOneRing.net to get all the latest Tolkien news!  Half an hour before the start of the movie greendragon (aka me!) welcomed folks to the theatre.  We had announced last week that there would be a costume competition tonight.  Only one brave soul showed up in costume – a very lovely Arwen outfit consisting of green bodice, skirt and even a wig! – and she was rewarded for her efforts with a prize of a set of commemorative coins which were released when TTT was first in theatres.  Having seen the prize, a few more folks thought they might costume up for next week – when there will be more to be won!
This week there was no mistake and we got to see all the preshow reel, including trivia, Weta’s message and of course TORn’s own fabulous bumper!  What fun to see familiar faces up there on the big screen!  Then  we enjoyed PJ’s words to us all, revealing some fun facts about filming TTT; I knew that Fran Walsh had directed the famous ‘schizo Gollum’  scene, but I didn’t know that the bodies of Sam and Frodo asleep in the background of that scene are doubles, as Elijah Wood and Sean Astin weren’t available that day!
The movie was fabulous, of course.  The blu-ray release really does brighten the image and bring out details that weren’t noticeable before (for example, last week in Fellowship of the Ring I noticed for the first time birthday presents on the table in Bilbo’s front hallway).  This heightening of detail, however, is for good and bad.  Some scenes now seem almost a little too bright; in the short scene with Galadriel her face had a strange, orangey-pink glow (still radiating after her nuclear moment?!)  Also, some effects and CGI, and the seams between reality and effects, are more noticeable in this edition.
All in all, though, I think these blu-ray versions of the movies will become the ones to have; it’s wonderful to see an old friend all spruced up and looking its best!  The theatre was sold out and is already full for next week, too.  Onwards to Return of the King – I wonder if Sam and Frodo will make it to Mount Doom?? The Two Towers looked just as flawless on the big screen as Fellowship. The theater was packed, but except for a few laughs and cheers, there was dead silence throughout the entire film. I felt the reverence for the film in the audience. That alone made the 90-minute drive worth it.

Peter Jackson’s introduction was much longer this time. He looked completely exhausted as he talked about the challenge of making the middle chapter, the crazy Helms Deep shoot, and process of bringing Gollum to life.

I only spotted one change in color: Galadriel in Lothlorien. She looked overexposed; there was a hot spot on her forehead. And she also looked more saturated. This is consistent with he tweaks made to the Lothlorien scenes in Fellowship.

Photos attached: 1) Waiting for the movie to start with my two brothers. 2) My mother and I standing outside the exact auditorum where we first watched The Return of the King seven and a half years ago!

More images from Nicholas in the gallery below

Second LOTR night down at the AMC.  Amazin’.  The Two Towers included another candid intro by PJ, to which he talked about his enthusiasm leading up to the first epic battle scene he’d film of his career, Helms Deep; in addition, he talked about the now infamous Gollum/Smeagol split personality scene that he neither wrote, nor filmed, that was added late in production apparently — giving Fran all of the credit.  The movie looked awesome on the big screen, in digital, which included lots more CGI than FOTR.  I did notice the sort of mindless swaying of the CGI characters filling in Helms Deep wide shots, and when Gandalf delivers his monologue at the end of the flick with Legolas, Aragorn, etc., it is definitely fuzzy (but I seem to remember that always being the case).  Nothing to get upset over.  There were some scenes I didn’t even remember from my extended versions…guessing I just forgot — was cool to think i caught something new.  Haha.  Thankfully, they moved this screening into a bigger room at the AMC, plenty of seats.  And to the heavily tattooed, sandals-with-shorts guys mid-row that wouldn’t stop giggling the whole flick like a couple of douchebags: why would you waste your money and ruin the flick for others?  Infuriating.  Well, on to ROTK next week!  Frodo lives!

I went for FOTR and TTT in the same theater. This was the first time I watched the Xtended edition of the movies on a big screen with the special effects and I must say it was MINDBLOWING!!!

This is exactly how LOTR should be watched and that’s how it’s meant to be watched. It was amazing to see, hear and be part of every detail in the movies. I felt like I was in middle earth myself. Initially for each movie I thought I was the only one who was going to be there since the theater was practically empty but within half hour the theater was packed. That’s when I realized that it was me who came too early. I guess I was tad too much excited and enthusiastic to finally watch the movies on big screen!!!!

What more, I loved the fact that Peter Jackson gave the short intros at the beginning of the movies AND that TORn was called out. It was all in all a great experience.

As far as the downside goes, my only problem was that the movies should have been shown in IMAX since the AMC Loew’s at new Brunswick has an IMAX theater. And there should have been some information shared about “The Hobbit.” And moreover that girl sitting next to me should just stop cackling throughout the movie for no reason, mind you, absolutely no reason at all! She laughed even when Théoden cried at the funeral of his son and when Haldir died!!!!!! What’s wrong with this world?!

Anyway it was a wonderful experience watching both movies. They really made my day. Thank you TOR for making this happen. Up next, I’m going for the RoTK next Tuesday. Yaay I’m so excited!! And I’m getting the Blu ray DVD as my birthday present next month from my brother!! It can’t get any better.
That’s it from me. Ciao. My fellowship and I saw The Lord of the Rings: The Two Towers at CineArts on Santana Row in Campbell, CA. The crowd this time was a little more energized than last and I couldn’t imagine watching the film with a more pleasant group of people. After Peter Jackson’s special message played, there was clapping and cheers, and I knew right then that the atmosphere was more festive. There was applause when the title came up, when Gandalf returned, when Shadowfax arrived, when Gandalf freed Theoden from Saruman’s spell, and laughter at even the slightest bit of humor. When Gandalf returned with Eomer and the Rohirrim to charge Helm’s Deep, there was so much clapping and cheering and awed whispers, and the scene was so epic in HD on the big screen, that I was flushed with goosebumps. There are some emotional experiences that you just can’t get watching a film alone that the shared experience of viewing with an enamored crowd delivers. Wow.

These films truly were meant for the big screen. Gandalf’s battle with the Balrog in the intro was breath-taking, and the features of Gollum were so much more visible (veins and wrinkles and hair) that he looked much more real. The sound was fixed this time, so the battle of Helm’s Deep was thoroughly enjoyable without any ear-plugging. Unfortunately, I’ll be out of town for ROTK, to my great despair. I informed a friend I’d made among the theater-goers to enjoy it extra for me. I can only imagine how excited the crowd will be for the events of Return of the King!

Included are some pictures from the event.

Tuesday night, my sister and I went to see The Two Towers at the AMC theater in Lombard, IL. People familiar with the are will know that this is a suburb of Chicago. As we all know, the Chicago area was hit by a huge storm Tuesday night. Thankfully, the theater did not lose power. However, they did stop the movie just after Theodred’s burial and have us go into the entrance area of the theater. After a little while, I stepped out into the hallway for a minute, and when I came back, they had started the movie again. Some of us slowly started to drift back to our seats, but then they stopped it again and had us go back to the theater entrance. While we waited, my sister chatted with some other fans who happened to attend the same college my sister just graduated from. Then, the staff members handed out re-entry passes to everyone there, which we plan to use for this coming Tuesday. ;-D

Eventually, they let us back to our seats and continued with the movie through the end. I do have to say that the interruption kind of ruined the flow of the movie for me, but I completely understand that the cinema staff were only tying to keep us safe. Other than that, I have no complaints. The movie was absolutely fabulous. I loved the intro from Peter Jackson at the beginning with the tidbit about the Gollum/Smeagol scene. I never knew that! I found it incredibly easy to get drawn into to the world of Middle Earth and lost in the story. I cannot wait for the conclusion of the trilogy on Tuesday, and yet don’t ever want it to end.

Here are the pics from the reports above! Click on an image to see a larger version. 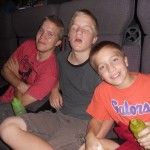 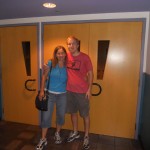 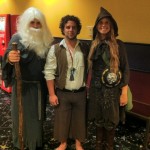 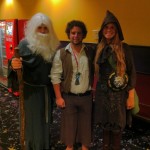 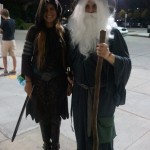 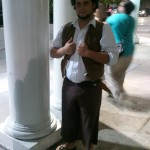 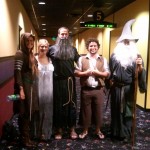 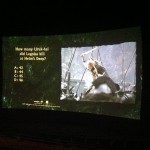 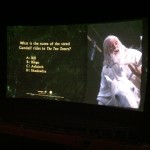 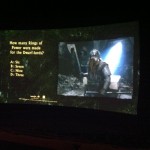 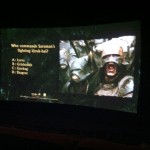 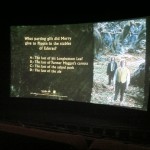 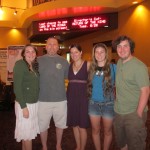 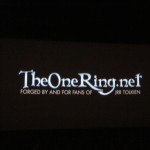 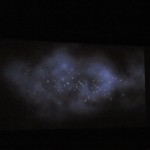 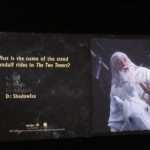