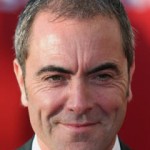 Message board member ranger123 alerted us to a people.co.uk article from Oct 3 stating that COLD feet and Murphy’s Law star James Nesbitt is making plans to pack up his family and move to New Zealand, having secured a ‘major’ role in “The Hobbit.”

Nesbitt, 45, and actress wife Sonia Forbes-Adam, also 45, have talked to their daughters Peggy, 12, and Mary, eight, about the benefits of staying on to make a fresh start. The Northern Irish star believes it will be good for his career and family life. A source said: “‘The Hobbit’ was always going to mean a long stay in New Zealand for James and he wanted his family around him.”

Now that “The Hobbit” has been green lit to start production in February, expect casting news such as this to fill the front page here at TheOneRing.net regularly. What part do *you* think Nesbitt is referring to? Bard, or one of the dwarves, are theories we’ve heard. Click the “Discuss” link below to share your opinion.

Update: rumor circulating around the internet this weekend (prompted by a Pajiba twitter) is that the role Nesbitt was offered is that of the dwarf Bofur. Bofur is the brother of the heavy-set dwarf, Bombur, and cousin of the dwarf Bifur.