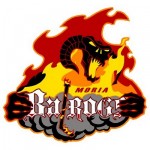 Steve Thomas writes: This homage was inspired by the races and places in Middle Earth. The idea came from out of the blue, but I have to admit – after doing a Google search to make sure no one else had thought of it – there was a fantasy (pun intended) Middle Earth hockey league set up by someone else, but I don’t think the site is up anymore. The teams weren’t named the same as I have below.

Anyway, these logos are about a year and a half old so they can technically fall under “Retro Thursday”. I’ve recently slapped them onto tshirts and stickers. The tshirts are completely customizable, meaning you can change the style and colour of the shirt. Zazzle has a large number of different styles from tshirts to hoodies. Check them out here.