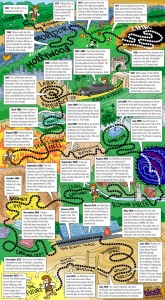 Although the film version of The Lord of the Rings was a massive worldwide success, getting J.R.R. Tolkien’s prequel, The Hobbit, to the screen has proven much more difficult. With the rights finally sorted out after being tied up for years and a studio feud with Rings director Peter Jackson resolved, the project finally began moving forward in 2008—only to be stalled this year by the looming collapse of MGM, one of the two companies financing the production, should it fail to find a way out of its $4 billion debt. More..