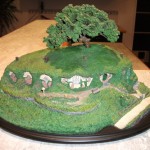 Darren writes: Being a fan of Weta’s sculptures I thought you may like to post a few pics of the Collectors Edition Bag End that was released today. Granted Weta have produced many collectables but in my opinion this has to be one of the ‘Holy Grail’s’ for LOTR collectors!! PRE-ORDER

From www.wetanz.com: Nestled in the gently rolling green hills of the Shire is the village of Hobbiton, a sleepy assemblage of stone buildings and burrows, home to the diminutive Hobbits. Overlooking the village from the hill at the end of Bagshot Row is Bag End, the stately underground abode of Bilbo Baggins, an eccentric Hobbit widely acknowledged about town as having cracked some years ago, and his cousin and ward Frodo Baggins, who is certainly in the process of cracking. Consorting with Wizards, Dwarves and other folk with dangerous ideas, the Bagginses maintain a museum of sorts in their home, the various rooms of Bag End being stuffed with treasures and trinkets accumulated over the years by Bilbo either on his adventures or as gifts from his peculiar company. PRE-ORDER