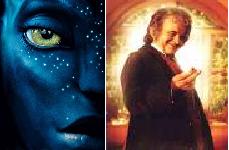 From MTV Movies Blog: “Titanic”‘s status as the top-grossing film of all time is being threatened by director James Cameron’s follow-up, “Avatar”.  Even if the movie’s box office earnings fall short of the “Titanic” numbers — two records, $600 million domestic and $1.8 billion worldwide — there is little doubt at this point that “Avatar” will at least settle in at number two on both of those lists, effectively making Cameron king of Hollywood, if not the world.

A number of factors need to align — a “perfect storm of events,” as Exhibitor Relations box office analyst Jeff Bock described it — for a movie to experience the sort of success that “Avatar” and “Titanic” did. He believes that it all starts with the release date, “a prime release date where you don’t have a lot of competition.”

So with all that in mind, let’s consider what’s hitting theaters in years to come to see if there’s anything that might give James Cameron’s record-holders a run for their money (pun definitely intended)…

There’s a lot going for “The Hobbit,” starting with the previous success of Peter Jackson’s “Lord of the Rings” trilogy. All three of those movies were mega-hits, with third entry “Return of the King” even picking up a Best Picture Oscar, a rare occurrence for this sort of fantasy spectacle-fueled blockbuster. Jackson is still involved as a producer, which means that we’re returning to his previously established vision of Middle-earth. “The Hobbit” is also a more family-friendly tale, at least based on how the book is written, and so it could conceivably draw in the valuable under-13 audiences.