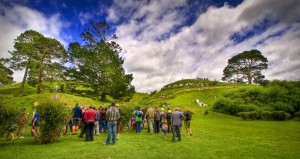 Continuing an annual tradition, Hobbiton Movie Set and Farm Tours opened its doors to Matamata locals yesterday. By the time the last tour had left over 600 people had undertaken a guided tour of the set and watched the sheep shearing demonstration whilst many decided to stay on for a “Second Breakfast” at The Shires Rest Café & Function Centre.

Initiated in 2004, the aim of Locals Day is to give the local residents an opportunity to visit the set at a special discounted rate. “The locals are very important to us and we enjoy guiding them around. We want them to be proud of the set and the tourism opportunities that have been brought to the area”, said Managing Director Russell Alexander.

“The interest in the set has been heightened in the last few months with reconstruction underway for the filming of The Hobbit at a later date”, he added.

Yesterdays event was the second busiest since the day was started, proving that interest in all things Middle-earth is not dwindling.
“Hobbiton Movie Set & Farm Tours staff are looking forward to a busy season, and yesterday was a great way to celebrate the start of summer” said Russell.

The set continues to feature in the media spotlight and on Saturday it was visited by four adventurous British students taking part in The Gap Year.

Not for the faint hearted, over the course of four amazing weeks five students chosen via online polls will travel together having the most amazing, high adrenaline adventures of their lives.

Every week, one traveller will be sent home, until a winner of The Gap Year: Challenge New Zealand is found. Partially sponsored by Tourism New Zealand, the video antics and blogs of the travelers are proving a big hit on social media sites such as Bebo, Facebook and Twitter with thousands of followers tuning in for daily updates.