TORN Pal and author Ethan Gilsdorf has agreed to blog his West coast book tour for us!

I’ve been on the road non-stop since September 1, promoting my book Fantasy Freaks and Gaming Geeks, and I have met many a fantasy and Tolkien fan as I’ve traveled from New York City to the South, the Midwest, around Boston and New England (my home) and the West Coast. I’m in Los Angeles now and have been reflecting on the meaning of Tolkien and his ground-breaking creation. Sometimes the dreams of Hollywood seem more distant than Middle-earth.

Today, as I was driving down Sunset Boulevard (checking that cliche off my list), I thought of Frodo. 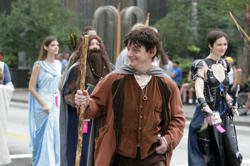 I mean Daniel Gauthier, who is a spitting image of the hobbit, especially in his impeccable Frodo costume. The first time I met Daniel (see photo) was at Dragon*Con last year, marching in their famous parade. We spoke, and later emailed, and he ended up being profiled in my book. I saw him again this year, but not at a con — at New York, at the Radio City Music Hall screening of the Fellowship, complete with live orchestra and choir. A magnificent event. He was there, again, in full hobbit regalia.

I thought back to our first meeting. I had asked the forty-seven-year-old French Canadian how he’d gotten into the Lord of the Rings, and he surprised me by saying that up until a few years ago, he hadn’t even liked Tolkien. “I was dragged kicking and screaming into the theater,” he said, recalling seeing the first movie. “Normally, I have no interest in fantasy.” That all changed in one evening. “I fell in love with Frodo and everything he represents.”

Once upon a time, Gauthier had identified more with science fiction and technology, and had a pessimistic outlook on humanity. But through reading Tolkien and seeing the Rings movies (fourteen times since 2003), and being embrced by the Tolkien fan community, he was transformed. “It changed my life,” he said.

What exactly had Gauthier found in Tolkien? Gauthier shared Tolkien’s idea that industrial and technological society was the coming Mordor. The ring that Gauthier carried around his neck became “a symbol of everything I despise in the world.” I sensed that he wanted to cast it into the fires of Mount Doom. But through studying the themes in the book—fellowship, sacrifice, perseverance—Gauthier didn’t despair anymore. And the hobbits, they stood in for us, representing what we might be able to do in an idyllic world—live in harmony with nature and each other, drink ale, share food, laugh, dance, and make music.

In his so-called “escapism,” Gauthier was inspired not to escape, but to turn full circle, to be courageous, to emerge, to become a leader in community service. “One of the responsibilities of being human is making your own decisions. It took me forty years to learn that lesson. It’s hard to do the right thing; it always has been. You have to develop the strength. Not physical strength.” By which I think he meant, the strength to turn the course of your life around, to engage with the world, and find hope again.

Then I thought about what TORN staffer Erica Challis (Tehanu) had told me when I visited her in Wellington, New Zealand (my conversation with her is also in my book). She had heard stories of people in oppressive societies who read Tolkien. The books gave them hope in hopeless times. “Fantasy is a genre people can read and retreat [to] and gather strength to face the real world,” she said. Refuge from oppression, personal or political, lay in the fairy world and the possibility of imagination. Fantasy kept the spirit alive and kicking.

And the belief that we can make a difference. As the elf queen Galadriel says to Frodo, “Even the smallest person can change the course of the future.”

Not that I expect to see Galadriel or Cate Blanchett on Hollywood Boulevard. But elves would not exactly be out of character here, in LA, the land of dreams.