AMC is doing their promo blitz for the updated version of ‘The Prisoner’, one of the cool items they sent along was this ‘Prisoner Timeline’ piece. Take a look! And don’t forget to catch ‘The Prisoner’ Sunday, November 15 at 8pm/7c on AMC.

When Patrick McGoohan’s The Prisoner aired in 1967, it was unlike anything else on TV. The brazenly surreal series became known for heady socio-political themes, outrageous sci-fi twists, willful absurdity, and head-scratching loose ends.

And what made the ’60s Prisoner challenging viewing way back when (and what makes it a cult classic today) has repeatedly inspired subsequent generations of creative risk-takers. Even if you’ve never watched one of the seventeen episodes of the old series (which are conveniently streaming on our site: http://www.amctv.com/originals/the-prisoner-1960s-series/ ), you’ve most likely felt it’s DNA in pop culture media since it’s influenced everything from Iron Maiden to The Simpsons and from Lost to AMC’s very own upcoming miniseries. View The Prisoner Timeline if you want proof! 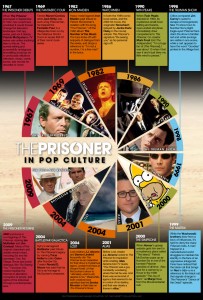 The Prisoner premieres on Sunday, November 15 at 8pm/7c. Visit the official site for more info: http://www.amctv.com/originals/the-prisoner/

The Prisoner will air over three consecutive nights, with two episodes each evening, from 8PM to 10PM ET on AMC.

A man, known as “Six,” finds himself inexplicably trapped in “The Village” with no memory of how he arrived. As he explores his environment, he discovers that his fellow inhabitants are identified by number instead of name, have no memory of any prior existence, and are under constant surveillance. Not knowing whom to trust, Six is driven by the need to discover the truth behind The Village, the reason for his being there, and most importantly — how he can escape.