Shannon writes: Thanks to your reporting I found out about Sir Ian attending the Shakespeare Gala in DC. It was several days after my twenty-first birthday, so I approached my parents asking them if we could make the trek there from New York as my present, and much to my surprise, they agreed. They are well aware of my goal to meet the entire Fellowship and have helped me meet five so far, so it seemed like a great idea to them to help me meet such an awesome number six for my birthday. 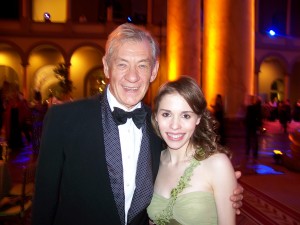 I attended the Sunday night reception, performance, and dinner and dancing event. When I walked up the stairs to the reception area I glanced around and spotted him in the middle of things. My eyes nearly bugged out of my head and I had to run to a nearby corner to call my dear friend since all that fanatic enthusiasm could not be contained in one body. The performances were remarkable – the coordinators did a truly fantastic job with the entire event. Sir Ian delivered a very funny acceptance speech and even graced the audience by performing a bit of Shakespeare’s Sir Thomas Moore. I swear, the air leaves the room when he acts. I don’t think I breathed.

At the dinner and dancing event I was lucky enough to have a few moments one on one with him. He took my hand in his and when he saw my bewildered, gleeful, and breathless reaction he smiled and asked if I was going to be alright. I told him I thought so. He took a picture with me and signed a picture for me, and I don’t think I stopped grinning the rest of the night. He is truly a talented, gracious, and regal man and I feel so lucky to have met him. It was the best birthday present I could have asked for!

Thanks for your wonderful reporting – it’s thanks to you guys that I have learned about all the events that the various actors have attended, so keep up the good work!