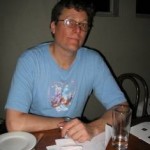 Message board member Elven was lucky enough to attend the KEA dinner in Sydney this week and sends in this great report:

“If more of us valued food and cheer above hoarded gold, unless its an Oscar, it would be a much merrier world.”
-Prof Tolkien.

I have just returned home from a wonderful night at the Danks Street Depot Cafe in Sydney after listening to KEA’s special guest speaker ‘Richard Taylor’ talk and inspire an audience. People hung onto to his every word and laughed heartily at his stories – we enjoyed it so much we almost forgot about dessert. The food was glorious – the menu designed by NZ chef Jared Ingersol, and there was plenty of wonderful NZ wines available for the tasting.

Richard spoke for a good hour on his career and the movies WETA had been involved with much passion, and gave reference and credit to those people who had helped him along the way. His presentation was punctuated with some very funny anecdotes about Oscar Couture, Meet The Feebles and Taxi Drivers – but his story held a special message regarding success and talent and doing what you do, no matter what that might be, to the best of your ability – turning your life into an art.

Richard also had on hand two little fluffy creatures – DottyWot and SpottyWot – from his childrens show the WotWots – they are so cute (if you havent seen the WoTWoTs) there’s a link below – they are really funny! He also brought along one of the Oscars he won – which was passed around the dinner tables as he spoke (peoples eyes nearly dropped out of their heads when they saw it, let alone to think it would be passed around).

After the dinner, I did approach Richard and manage enough courage to ask if I could take a photo and post it on tORN, which he was very obliging about – he had been in Australia since the early hours of the morning (it was now 10pm) and had already spoke at a luncheon in Melbourne, Im sure he must have been tired. I also quickly told him my story of how transcribing the commentaries and EE appendices had inspired and taught me so much that I gained enough confidence to be able to get into doing short films – and I thanked him for all the knowledge he had passed on – I couldn’t have managed without such valuable information he and the rest of the cast and crew imparted. I wore my Grima necklace which he noticed and said was very good. (geeky squeeeee).

If you ever have the chance to hear Richard speak on his career it’s an experience no geeky fan should miss.
It was a great night!