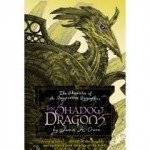 “The Shadow Dragons (Chronicles of the Imaginarium Geographica),” released October 27, 2009, is the fourth installment of James Owen’s The Chronicles of the Imaginarium Geographica. In this installment, J.R.R. Tolkien, C.S. Lewis and Charles Williams, members of the Ancient Society of the Caretakers of the Imaginarum Geographica, are back to protect the Archipelago of Dreams and our world. Legendary Caretakers, past and present, will have to join forces with the mythical Don Quixote to prevent Mordred and his lieutenant, Sir Richard Burton, from rebuilding the collapsed Keep of Time and take over the world –both the Imaginary and our own. Time, space, legendary writers and larger than life characters meet as the Inklings take on the adventure of The Shadow Dragons.