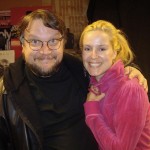 SE: Oh, I know, I read it too. I read a couple of them online. I’m very excited for you.

GDT: Yeah, well, I hope you like the book.

SE: I’m going to read it. I haven’t read it yet, but now that I’ve read the reviews I’m really excited to read it.

GDT: You will like the evil, nasty creatures – you will.

SE: I will! And I have a few questions for you.

GDT: Well, I think that vampires are actually of all the monsters strangely enough… they are the ones that I admire and am scared of in a way that is really very deep. I fear spiders and I have an aversion and an attraction to insects and the same thing happens to me with vampires. I have an incredible attraction and an incredible fear of them. And I… uh… I love designing them. You know when we designed the creatures on Blade II they came from the same sort of vein and idea that these ones are coming from and… you know it all originated when I was a child… I read a quote in one of the factual vampire books that I have that specify that in some Polish folklore vampires are believed to have like a bee sting on the tongue. And that freaked me out as a kid. And I related insects and vampires in a single flash of memory if you would. And if you watch Chronos – my fist movie – I kind of mix vampiric mythology with insect mythology or morphology and stuff. And it’s a continuation of that same disquieting obsession.

SE: Of course, and now you have to write a book about it. How fascinating!

GDT: Yeah, and I love them. But these are not sexy, not romantic, not fascinating. They just want to kill you.

SE: And yes that’s another thing, I read a quote from you that I found in an interview online where you say that: “my vampires are menacing, real, disgusting, and alien” and I thought about Peter Jackson and his horror movie Bad Taste and how he loves disgusting things and I thought “These guys have got to get along!”

GDT: Oh, we get along. Years and years before I met Peter [Jackson] – and you can check it online it think it’s available online – I wrote an article for Fangoria’s 20th Anniversary magazine in which they contacted some directors and said: “Talk about your favorite horror film,” and I wrote an article about Bad Taste. This is years before we met, before I even predicted we would ever meet. And actually, one of the reasons why I like Lord of the Rings – and I don’t normally like fantasy movies – is because texturally the eye Peter has for decay and corrosion comes from a horror film eye. He is almost like a Hammer film Art Director into the world of Sauron and, you know, the decaying towers, and all that…. there is a sense of menace in the way he art directed those movies that comes only from watching horror movies. So the esthetics of that immediately viscerally connected with me.

SE: Yeah, the dark is really dark and I recall that with Pan’s Labyrinth too. I was wondering… this affinity that you both have for the dark and the light and the horror and the disgusting stuff… how is that affecting your work on The Hobbit together?

GDT: We really love to geek out often, and you know, we have so many things in common. He’s a model painter – I’m a model painter. He loves certain directors that I love. We are both Jack the Ripper… eh… Ripperologists. We are fans of studying that case. We love automotons – both of us. We were transfixed as children with The Planet of the Apes – both of us. When I was a kid I had a whole collection of 100 Planet of the Apes action figures. I created sets for them and I did Super-8 movies of them. And we love [Ray] Harryhausen. We love animation this and that. We both created for many of our movies our own makeup effects. So there is many, many things that we are alike. You know, in what we are not alike I’m yet to find out, but I’m sure that we will have disagreements and so forth but so far it’s just joy and beauty.

SE: So far so good! Yeah, we the fans at TheOneRing.net, you know, when we first found out that you were going to work together we thought: “Aaah, what if they don’t get along and they have to do all this writing and be stuck in a room together!”…

GDT: No, it’s been… I mean I’m having the best time of my life right now. Yeah.

SE: I love to hear that. That’s great.

SE: Aaaw… So here’s another question. Being a foreigner to America – I am myself Swedish [GDT: Oh!] so I can relate to this – my mother read me “The Hobbit” in Swedish when I was seven years old and she produced The Lord of the Rings for Swedish National Radio [GDT: Oh, my God!] when I was a kid. So my question is: How does it feel to you being from Mexico and adapting this work that is in a foreign language and which is from this aristocratic, stoic, British culture – and you being from this passionate, Latin culture. How does that feel to you?

GDT: I don’t know, you know… I believe that some of the people that I have admired their understanding of English literature – the most – which is Jorge Luis Borges and Vladimir Nabokov – they were both foreign to that literature. I mean, I think Borges started and did brilliant stories about Nordic mythology and about English literature and Nabokov was incredibly articulate about analyzing Jane Austen, Charles Dickens and so on and so forth in his books about them. And one of my favorite writers in the English language is Joseph Conrad [SE: “Heart of Darkness!”] who was a writer that wrote in his second language. So I believe that, you know, those are fabrications, and the language of Art should not know of geography, should know only about emotional and spiritual connections. I find it ridiculous to think that way – frankly – and I think if that was the case then you know, Peter [Jackson], being a guy that was born in a colony of England that, you know… didn’t grow with precisely the exact environment and so forth, that didn’t impede his full understanding the way he saw things. I have been successful in two films that deal with the Spanish Civil War. My view there was back with Pan’s Labyrinth. I am Mexican. I was not born in Spain.

GDT: It’s much more interesting for me to see a point of view that is articulate than knowing where the guy is from. I really don’t necessarily do… I don’t think there is such a thing as like a certificate of nationality necessary to talk about those things. In fact, the root of Gothic literature is the fascination of English language writers with the romantic war. Which is namely Italy, Spain, you know. Ann Radcliffe writing about Italian intrigue. Or… eh… famously Matthew G. Lewis writing “The Monk” which happened in Madrid – in Spain. And, I don’t know if they visited or not but I can tell you it didn’t impede their tales to be great. So I find it immaterial.

SE: Right… and on that note… I know you really love folklore. I am curious about what type of folklore you grew up with in Mexico that is specific to your region… because I know being Swedish I grew up with a lot of the Brothers Grimm fairytales and so forth, but I’m curious about if there is a specific theme…

GDT: I think I grew up with Grimm’s fairytales too! [chuckles]

GDT: Most people! But I think that what I grew up with… there is a sense of magic that permeates every activity. I mean, I jokingly say that, but it’s true, you can be having dinner in Mexico and somebody can say: well, you know, “Friday I saw a ghost,” and somebody will say: “Oh, really, cause I saw one on Wednesday.” I mean there is a sense of permissiveness about accepting and living the supernatural in a very everyday-way, in an accepted way. We don’t refute it – we accept it. And you know that is… our mythology is very local, very regional. Each town has its own [mythology].

SE: Absolutely. So finally, last question… Why a novel, and why now?

GDT: Oh dear God! That is too long!

GDT: But let me say this. When we created the novel Chuck and I, we wanted for it to have some cinematic rhythm, some features that are clearly visual but we gave birth to it as a novel. It’s not an adaptation of this or an adaptation of that. It originated as an idea for a long arc limited series on TV, but when that was abandoned I wanted to reinvent it as a novel from the get go. And my favorite passages in it are completely literary.

GDT: They are unfilmable – my favorite passages.

GDT: I hope you enjoy it.

SE: I will. I’m going to. Let’s take a picture! Thank you so much for your time!