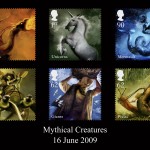 A boulder-wielding giant and a fire-breathing dragon are just two of the illustrations on Royal Mail’s stunning Mythical Creatures stamps.
Issued on 16 June, the six stamps feature fantastical characters from the UK’s rich history of folklore and legend, brought to life by the artist Dave McKean and Neil Gaiman, bestselling novelist and creator with McKean of the Sandman comic.

Look closely at his astonishing set of illustrations and the imagination is quickly working overtime; which is probably why these creatures – and the stories behind them – have such an enduring appeal.
Gaiman, who has collaborated with McKean on many occasions, has written a special Presentation Pack, designed by McKean, which contains all six stamps. In it the author delves into the history of the creatures featured on the stamps.

Issued in pairs the 1st Class stamps feature the fiery breath of a suitably frightening dragon, which contrasts with the majestic stone-grey appearance of a unicorn.

There’s an even bigger contrast on the 62p stamps, as a boulder-carrying giant is paired with a snail-riding pixie.

Queen Mab takes the reins of her flying chariot representing fairies on the first 90p stamp, and is joined by the graceful blue-tinged form of a mermaid.

Julietta Edgar, Head of Special Stamps, Royal Mail said: “Dave McKean’s illustrations for these stamps are truly breathtaking. He has created a series of images, which by turn, are beautiful, amusing – and spine-tingling.”

Common to the mythologies of many countries the dragon has a reptilian body, traditionally breathes fire or spits poison and often has a pair of bat like wings. Often the guardian of treasure hordes and frequently the terror of fair maids.

Apart from the famous associations with St George and the red dragon of Wales, dragons also appear in the Mabinogion, a series of 12 medieval Welsh stories.

Or Piskies as they are known in their native West Country (and featured on the stamp) look like old men with wrinkled faces. They are small in stature with red hair and dress in the colours of the earth especially green, usually cheerful and helpful, but they also like playing pranks.

Part woman and part fish stories abound in coastal communities of Mermaids, who would often entrance sailors with their song causing them to run ships aground or jump overboard, then carry them off to their undersea home – forgetting that they breathe air.

Sometimes good and sometimes bad, the fairy folk come in many forms, here Queen Mab takes to the air in her hazelnut chariot. Queen Mab is described in Shakespeare’s Romeo and Juliet as a tiny fairy who drives her chariot across the faces of sleeping people.
Mythical Creatures – Technical Details

Mail Order Price: Cancelled and stamped only from Tallents House: £4.86 UK for the stamps

Six postcards bearing enlarged images of each of the Mythical Creatures stamps go on sale about a week before the stamp issue date. Printed by Fulmar Colour Printing Company Ltd.

Unstamped Royal Mail First Day Cover envelopes (price 30p) will be available from Post Officeâ branches and philatelic outlets approximately one week before issue. Collectors who hand in or post covers at main Post Officeâ branches will receive the pictorial DRAGONBY, SCUNTHORPE first day postmark, which was chosen as it is a suitable place name.