Jack M sends this in: Looks like the northerly storms did some pretty serious damage to the Lothlorien bridge. It was pretty unique – it’s the only pre-existing manmade object to appear in the movie. It had just been restored in the last year, as the lake area was being renovated. Although that the weekend storms have now receded somewhat, we’re still trying to make contact with the owners of the property, Colin and Rosie Bevan. 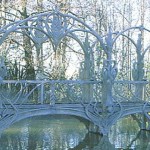 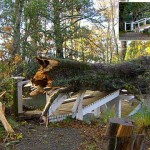 I’ve been a Wellington LOTR tourguide for over 5 years, and I work for one of only two companies to visit this location, (Flat Earth Tours).
We’ve been taking guests there for picnics for many years, and this will be a huge blow to the LOTR community. According to the article, it’s going to cost approximately $35,000(nz) to fix, so I’m not sure what the immediate future holds for the bridge.

I am due to visit the location this Wednesday with a group, I’ll write in with an updated asessment of the situation after that. Hopefully we can still visit the location, as it’s got a lot more to offer than just the bridge – it’s also where Galadriel waved goodbye to the fellowship when they left Lorien, and furthermore it was where the Gladden Fields scenes were filmed (where Smeagol killed Deagol and took the ring as his “birthday “gift”).

I’ve included two photos – one shows Peter Jackson’s version of the bridge, the other was published on www.stuff.co.nz, with an inset of the actual shape of the “modern” bridge (read: non-elvish), as it looked before this weekend.