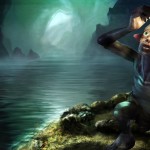 Turbine kicks off the 2nd anniversary celebration for its award-winning massively multiplayer online game, The Lord of the Rings Online, with a special limited-time anniversary pricing promotion and various in-game anniversary activities (see official release below for more information).

“It’s been another incredible year for LOTRO and Turbine,” said Jeffrey Steefel, Executive Producer of The Lord of the Rings Online™. “Being named both 2008 MMO of the Year and Best Expansion of 2008, coupled with the overwhelmingly positive response to the game from fans, has firmly cemented LOTRO as one of the world’s premier online entertainment experiences. Our anniversary is a chance for us to celebrate with our past and present players and enjoy everything that is special about Middle-earth and thank them for their wonderful support with some special subscription options.”

The Lord of the Rings Online Second Anniversary Celebration includes:

Anniversary Pricing Plans: From April 24th through June 30th, Turbine is offering special anniversary pricing plans. Players can choose any multi-month plan (90 days or longer) and lock in a monthly price of $9.99 for as long as they maintain the new subscription plan.*

o During the anniversary celebration, monsters throughout Middle-earth will drop rare items when defeated. Players can exchange these rare items for a special gift box that will reward them with a variety of in-game items to aid them in their adventures in Middle-earth.
o Turbine is also giving players who have active subscriptions as of June 30th a special in-game gift—the Writ of Passage, which provides 20% discounts at stable masters throughout Middle-earth.
The Lord of the Rings Online is the ultimate interactive adventure. Join Gandalf, Frodo, Bilbo, and many other characters to save Middle-earth in the war against the Dark Lord Sauron! This award-winning MMORPG recently expanded with the launch of the critically acclaimed Mines of Moria, where players can adventure into one of the largest and most dangerous online underground environments ever created while extending the challenge to new heights with two new classes, ten additional levels, and hundreds of new quests including a face-off with the Watcher, the Balrog and more! The Lord of the Rings Online™: Mines of Moria™ is available for purchase across North America and Europe. For more information or to download a free trial, please visit www.lotro.com.

Turbine, Inc. is a premier creator, operator and publisher of massive, persistent online worlds that foster powerful social gaming communities. Turbine is the largest privately held online gaming studio in North America and was recently chosen by AlwaysOn as one of the OnHollywood 100 Top Private Companies, a power list of the top private emerging technology companies in digital entertainment and media. The company has created some of the world’s most popular and award-winning online games, including The Lord of the Rings Online™, Dungeons & Dragons Online™ and Asheron’s Call®. For more information on Turbine, its products and services please visit www.turbine.com.

The Saul Zaentz Company d/b/a Tolkien Enterprises is the holder of worldwide motion picture, legitimate stage, merchandising, and other rights in J.R.R. Tolkien’s literary works The Lord of the Rings and The Hobbit. Tolkien Enterprises has been producing and licensing films, stage productions and merchandise based on Tolkien’s works for more than 30 years. Its headquarters are in Berkeley, California, and its website may be found at www.tolkien-ent.com.

*For current subscribers, the anniversary price plan takes effect at the expiration of their current subscription. For new players, it takes effect at the expiration of the free 30 days of game time that is included in their purchase of The Lord of the Rings Online
R20;The Lord of the Rings Online,R21; “Shadows of Angmar,” “Middle-earth,” “Mines of Moria,” “The Lord of the Rings,” and the names of the characters, events, items and places therein are trademarks or registered trademarks of The Saul Zaentz Company d/b/a Tolkien Enterprises under license to Turbine, Inc. Turbine and the Turbine logo are trademarks or registered trademarks of Turbine, Inc. in the United States and/or other jurisdictions. All other trademarks are the property of their respective owners.