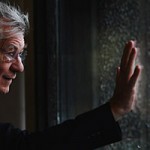 In a trailer on the edge of a film set beneath an underpass in downtown Cape Town, Ian McKellen, 69, is musing about fame and death, and what the papers will say when he goes. “ ’GANDALF DIES,’ I expect,” he says. The thought tickles him. Not the dying part. The part about being a classical actor and having billions of fans, most of whom are 12. “When you spend as long as I have doing beautiful work which is only seen by a few thousand people, to be involved in popular entertainment without lessening one’s standards … that’s fairly appealing,” he says. “You become part of the culture.” It’s not that McKellen ever shied away from fame. On the contrary, he sought it out “to publicise myself to people who might employ me.” You might say he overachieved. “Now it’s … well, it’s gone well beyond that.” Ian McKellen: The Player