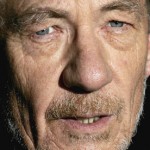 Surprisingly for actors born within two years of each other in the neighbouring counties of Lancashire and Yorkshire, the 2000 blockbuster X-Men was only Sir Ian McKellen and Patrick Stewart’s second professional collaboration. Prior to that, they had shared a brief scene or two in the premiere of Tom Stoppard’s Every Good Boy Deserves Favour in 1977, but had otherwise pursued independent careers, albeit with a startlingly similar mix of high-brow and popular. Where one played Captain Jean-Luc Picard in Star Trek, the other played Gandalf in The Lord Of The Rings. Where Stewart’s CV includes Prospero, Macbeth and Claudius, McKellen’s boasts King Lear, Richard III and Iago. And where Stewart is a sex-mad egotist writing a dire film script, McKellen is a pretentious thesp who treats every banal idea as if it were a profound revelation – that is, according to their brilliant self-parodies in Ricky Gervais’s Extras (“The rather appalling thing about that,” says McKellen with typical modesty, “is how close to me that parody is.”) Sir Ian McKellen and Patrick Stewart interview: Tramping the boards Posted in Ian McKellen on March 1, 2009 by xoanon