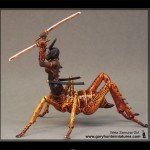 Gary Hunt writes: I worked on the trilogy and am still at Weta Workshop. I also have my own Pewter miniatures business, www.garyhuntminiatures.com. I’m just dropping you a note that your readers might be interested in: The Weta cave, (Weta Workshop) Miramar, Wellington, NZ now have a selection of my Pewter miniature kits for sale and on display. There are two ranges, my recently released 21st Century Amazons… Sci-fi Fantasy figures in the wargaming 28mm scale, (Girls with guns, and strange insect crosses, Zombies and Feathered Raptors etc) and a collectors scale, 54mm range that encompasses sci-fi and Historical characters and the Duke of Wellington mounted at Waterloo. The figures, as well as looking cool on your mantelpiece or part of a mass battle against aliens can provide some basic modelmaking skills that can lead to converting and sculpting your own characters (this is in fact how I learned to sculpt and gave me the desire to work in film). If you happen to be a long way from New Zealand you can view my Sci-fi, Fantasy and Historical ranges on my Website www.garyhuntminiatures.com and progress photo’s of new sculpts, hopefully i’ll have some of a dragon i’ve started going up soon on www.myspace.com/garyhuntportfolio