Welcome to the Celebrity Millennium, our home during the Cruise to Middle-earth as it sailed from Auckland, New Zealand to Sydney, Australia. 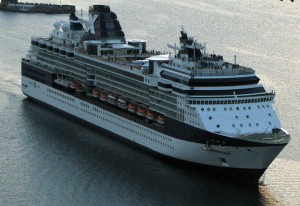 Our group spent a lot of time together in both the dining room and in the Gamma Room, which was the meeting space we used to screen the trilogy and to have the occasional party. Time spent onboard the Millennium allowed everyone a chance to explore the different bars and lounges, catch a Broadway style show in the main theater, visit the spa (one of my favorite pastimes) or catch up on email in the computer center (my other favorite pastime, me addicted to the internet, never). We had one family in our group with a 5 year old who spent a lot of time in the Fun Factory (area just for kids) and loved every minute of it. Others found time to do some reading in the library or to listen to live music in the Cova Cafe.

We had a fairly busy schedule onboard the ship the first few days because we were trying to view all three of the films before visiting the corresponding locations used. Didn’t quite turn out as planned, partly because we were watching the extended versions and they are long, and partly because many in the group were jetlagged the first few days and we were watching after dinner. Luckily, the event planner on the ship was very accommodating and helped us secure the Gamma Room for several more sessions during the cruise so we could finally get all three films screened. We even had a pajama party one night after dinner, which was rather fun. Also, on the last day at sea, we had an Aussie candy party, hosted by our Aussie contingent. They had bought bags and bags of assorted candy in Melbourne and shared with everyone in the group, who were eager to eat loads of foreign sugar products. 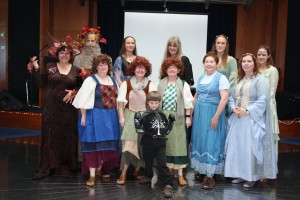 Then there was the costume cocktail party. Costumes were not required, but I did let everyone know that they were free to bring them, wear them, and enjoy being seen in them. We had a cocktail party in the Cosmos Bar on deck 11, which included hot and cold snacks; after a little snafu in the kitchen was corrected (I’m so glad I carry my paperwork around with me). We took group photos of everyone in costume, which was at least half the group. We did not have the bar to ourselves, but we were definitely the center of attention. While we were taking photos of each other, other passengers were taking photos of us. Later in the evening, when we were going to dinner, we were stopped and asked where we were performing on the ship. I guess that is a compliment to how good the costumes looked. 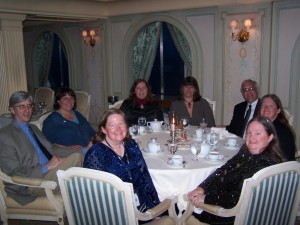 A group of 8 of us made special reservations to eat at The Olympic one night. This is a specialty restaurant onboard the Millennium and requires an extra fee of $30 per person. Doesn’t matter, it’s totally worth it. The ambiance was classic, the service was impeccable and the food was amazing. They even have one course that is just cheeses and another that is a small serving of flavored ice, to cleanse your palate. When they would remove the plates for one course, they did it synchronized, so all 8 plates were removed at the same time. They did the same when bringing a new course, 4 waiters would surround us and place the plates on the table at the same time. They called themselves the Men in Black, we sort of thought of them as a very nice group of Nazgul. Every morsel of food in all5 or 6 courses (I lost count) was delicious, and I’m so glad we were all able to make the time to do this. 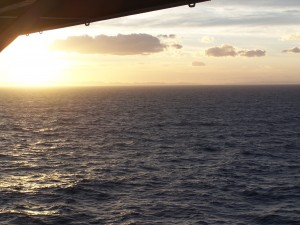 This last picture is of a sunset from my verandah on day 2, with New Zealand off in the distance, somewhere between Tauranga and Napier.

Next comes the review for the land portion, at least, the LOTR activities our group participated in, and maybe a few other excursions thrown in for good measure.