Andy Serkis comes out from behind Gollum and King Kong 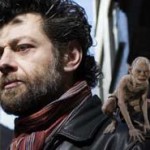 From The Sunday Times: He has portrayed some of the most extraordinary characters on screen, from King Kong to Gollum. Now Andy Serkis is emerging from behind the disguises and gaining recognition as a fine actor. Andy Serkis with one of his film characters Gollum on his shoulder. Andy Serkis has made a living out of playing nutters, freaks and psychopaths. So it is more than a little worrying when he tells me that “It’s really hard to come out of character.” He is the Boris Karloff of the 21st century, the actor the top casting directors call for when they want a monster to scare the audience witless. He played the titular 25ft-tall gorilla in the 2005 remake of King Kong, and the loathsome Gollum in Peter Jackson’s Lord of the Rings trilogy. In the television play Longford, last year, he became the Moors murderer Ian Brady. And we have just seen him in BBC1’s Little Dorrit as the murderous Rigaud, a character he himself has called “a thoroughly nasty piece of work”. Even when Serkis played Einstein — in the BBC film Einstein and Eddington — he brought out the darkness in the Nobel laureate. “It was a dream role,” he says, eyes blazing, hands clasped. “Apart from the great things we know about him, Einstein could be pretty ruthless, manipulative and dark. Ninety per cent of his time and energy was focused on work, and this was one of the biggest regrets of his life He just felt really guilty for screwing up his children, who were part of the sacrifice.” Andy Serkis comes out from behind Gollum and King Kong