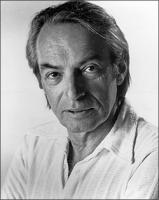 Leonard Rosenman, composer for Ralph Bakshi’s ‘The Lord of the Rings’ film, has passed away. According to the report at Variety.com, Leonard died Tuesday of a heart attack at the Motion Picture & Television Country House and Hospital in Woodland Hills, Calif. He was 83. Among many awards and nominations, Mr. Rosenman earned a 1978 Golden Globe nomination for his work on ‘The Lord of the Rings.’ May he rest in peace. Thanks to Camillu for alerting us to this news. [Variety Story]