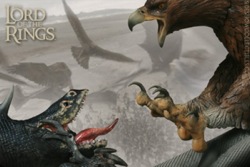 Sideshow has been teasing this Lord of the Rings polystone diorama since Comic-Con 2007. During their panel presentation, they showed an impressive unpainted version of what looked to be a very dynamic battle in mid-air. Jump ahead a half year, and on professor Tolkien’s birthday, we got an even clearer picture of the unpainted Fell Beast portion of the statue. Today (finally!), we get the official preview, complete with a glimpse of the fully painted Fell Beast and Eagle head sections. With the official preview now launched, we can guess that pre-orders will begin next Thursday, February 7th. Click on the image or the link below to visit Sideshow’s preview for the Fell Beast vs. Eagle – ‘Battle Above the Black Gates’ Polystone Diorama. [View the Preview]

Posted in Collectibles, Merchandise, Sideshow Collectibles on February 1, 2008 by Calisuri