I hope I wasn’t the only person jumping with joy at the news that Guillermo del Toro is 99% confirmed to direct ‘The Hobbit‘.

I’m hoping this will be the start of the a similar ‘dream run’ to what we saw with LOTR, when so many decisions, one after another, just felt so right. After seeing his work on Pan’s Labyrinth last year, I’m incredibly excited to think of him directing one or both Hobbit movies.

Pan’s Labyrinth is one of those movies that realises the unique potential of film. Any director that could make something so powerful and exhileratingly magical as Pans’ Labyrinth would do amazing things with The Hobbit. I walked out of that film haunted and moved by images that stayed with me for days. No one thing by itself made the movie great: it was a combination where the sum of the whole was greater than the parts. The result was something that I don’t think I could experience in any other way. No music, no book, no theatre, nothing could quite have given me the same experience. I had to go back and see it again to try and absorb all it was trying to say.

Michael Martinez coined a wonderful phrase, back when the LOTR films were in their early stages. He said it would be disappointing if the films were nothing more than a “visual Xerox of the books”. What Peter Jackson’s films did was give us an experience that was gloriously cinematic, that worked every element of film making to give us something that was not Tolkien’s book, but something great and unique of its own. Del Toro seems to have the same abiility.

Just as importantly, Pan’s Labyrinth proved that he takes fantasy very seriously. Like Tolkien, he uses fantasy to talk about serious things in a sidelong, multilayered way. Bilbo is weakness confronted by power and greed; he is innocence forced to confront war and make hard decisions. At the end of the book, he has to stand against his friends and strike a bargain that may – or may not – make an end to war. His bargaining with the Arkenstone is the unexpected choice. It’s told lightly, in a way suitable for children, but it’s still serious under it all.

Del Toro’s story has a central character, Ofelia, hopelessly overmatched by the grim, violent world of the adults around her. She uses the power of her imagination to escape – but even her fantasies become increasingly dark. She is just a little girl yet she must match her courage and wits against strange creatues, underworld beings who have their roots in ancient myths like Persephone in Hades. Ofelia is a prisoner of the repression around her – and Tolkien, who wrote passionately about fantasy and imagination in his essay On Fairy Stories, would have applauded her powerful attempts to escape through imagination:

“I have claimed that Escape is one of the main functions of fairy-stories, and since I do not disapprove of them, it is plain that I do not accept the tone of scorn or pity with which “Escape” is now so often used: a tone for which the uses of the word outside literary criticism give no warrant at all. In what the misusers are fond of calling Real Life, Escape is evidently as a rule very practical, and may even be heroic. In real life it is difficult to blame it, unless it fails; in criticism it would seem to be the worse the better it succeeds. Evidently we are faced by a misuse of words, and also by a confusion of thought. Why should a man be scorned, if, finding himself in prison, he tries to get out and go home? Or if, when he cannot do so, he thinks and talks about other topics than jailers and prison-walls? The world outside has not become less real because the prisoner cannot see it.“

Del Toro says that fairy stories are among the earliest influences on his own storytelling. Passed down from antiquity, filled with blood and violence as well as beauty and magic, they speak to the fears and anxieties of their audiences, both adults and children. “I believe that fairy tales are ultimately about two things: facing the dragon or climbing back to the world outside,” says Del Toro. It’s interesting to compare that with Tolkien, who argued for the dragon in Beowulf as being more than just a fanciful ornament to the tale. Monsters and dragons are central to the story, he argued, because of what they represent. I get a feeling that Del Toro would totally agree. 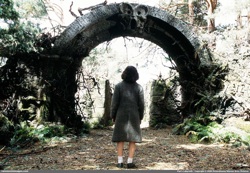 Del Toro, like Tolkien, works with a great deal of respect for the time-worn rhthyms of the great fairy tales. Both The Hobbit and Pan’s Labyrinth have a simplicity and clarity of structure that works because it satisfies our oldest expectations of good storytelling. Del Toro says of his film that all the elements are fashioned after the classical patterns: the underworld banquet where you should not eat, the three doors, the descent, the magical power of the blood of an innocent etc. Ofelia has to pass three tests. At some crucial moments she does not make the right choice or do as she has been told (like Bilbo lying about the Ring to Gandalf, or taking the Arkenstone knowing that Thorin wanted it above all other things).

Del Toro’s film is wonderfully structured, with the real and fantasy worlds in a clever and effective dialogue with each other, echoing and commenting on each other; it’s visually stunning, the music is beautiful and the acting is great.

I’d love to see what he’d do with The Hobbit. I believe he would understand how to let Tolkien’s story shine through as he intended with its layers of meaning, its magic, and his sheer excitement. Because The Hobbit deserves to be made as something that works as more than just a simple tale for children. If that were all it was, we wouldn’t be drawn to re-read it and love it as much as we do. Yes, it is a children’s tale, and I would not want to see in it anything as terrifying as Pan’s Labyrinth. But a director who could tell the story for children and still let the deeper, archetypal meanings out to play – he’d get my vote.

Tehanu is Co-Founder and News Editor of TheOneRing.net. She can be contacted via email at tehanu@theonering.net. For an index of her archived ‘Tehanu Notes’ features, please visit the Archived TheOneRing.net here.
Posted in: Share: