From the folks at WETA: Hi Weta fans and supporters

Welcome to Weta’s ENews for November. We’ve been a busy bunch – with news that Weta Workshop are crafting props for the upcoming KISS concert and collaborating with Black Sheep Director Jonathon King on a book adaptation, Weta Productions are teaming up with a TV giant to develop new properties and the Weta Limited Raygun competition being announced – you can be sure that there is much to talk about! Read on for more info…

RAYGUN COMPETITION WINNER ANNOUNCED! A Scottish Raygun fan has won the ‘Complete Your Raygun Set’ competition! Winner Daniel Leyden (pictured, left), literally danced with excitement when he received the email from Weta Customer Services telling him he had won Weta’s ‘Complete Your Raygun Set’ competition. “I was at work when I found out”, he says excitedly. “I just jumped up and down shouting ‘I’ve won! I’ve won!’” Daniel says this is the first time he has collected anything and was somewhat unprepared to add

WETA WAS MADE FOR LOVING KISS You won’t believe what we’re working on at Weta this time – special effects for the upcoming KISS concert here in NZ! Last week, Capital C: Concerts announced it had signed the legendary group KISS (pictured, right), to perform in New Zealand. And this week, we can reveal that Weta Workshop will be working the gig, too! We will be adding special set effects to the double headed rock weekend and the public will soon be getting more ‘surprises’ as the other international bands are announced. 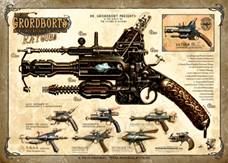 DR GRORDBORTS CONTRAPULATRONIC DINGUS DIRECTORY OPENS FOR SALE! On Monday 3 December, we’ll be opening pre-ordering of the Weta Publishing and DarkHorse book, ‘Dr Grordbort’s Contrapulatronic Dingus Directory (pictured, left) to all customers! This is a thirty-two-page catalogue that reveals a world where chivalry is not dead, advertising is beautiful, and ray guns look too pretty to be lethal. The directory showcases dozens of arcane inventions, contraptions and weaponry. This catalogue is only $12.95 (US) and is a must have for any Dr Grordbort or Raygun fan.

MESSAGE DELIVERED BY CARRIER PIGEON The world’s first advertising billboard delivered by pigeon left Omaka Aviation Heritage Centre in Blenheim on Friday aboard 289 homing pigeons and was completed this morning by Weta Workshop Director Richard Taylor. Each of the 289 pigeons carried a small piece of the billboard strapped to its leg. The birds flew to Wellington where the billboard was pieced together over a period of days in a prominent, central Wellington site. Read more about this great project here.

WETA TEAMS WITH BLACK SHEEP DIRECTOR ONCE AGAIN Weta Workshop has teamed up with Black Sheep director Jonathan King once again, this time to bring a NZ fantasy novel to life! The New Zealand Film Commission and Capitol Films are investing in a new feature film to be based on the classic fantasy novel by Maurice Gee. The film, Under The Mountain, is to be the second feature directed by Jonathan King, whose first feature was Black Sheep (pictured, below). 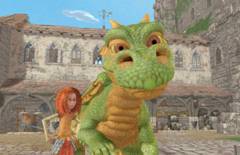 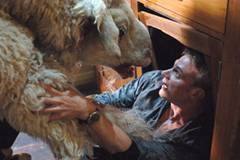 JANE AND THE DRAGON DIGITAL WIZARD SPILLS TIPS Jane and The Dragon’s VFX supervisor, Trevor Brymer, gives us some inside info on the Motion Capture technology used for the series (pictured, right). “We decided to treat the motion capture shoot just like a real live action shoot. One of the biggest challenges was dealing with the scale issues between the actors. Because the characters in the series were to be different heights to the motion capture actors, we faced some interesting scale issues!” Read more here.

HONARARY AWARD GIFTED TO RICHARD TAYLOR Richard Taylor’s contribution to New Zealand’s export sector has been recognised with an Export Year 2007 Honorary Award! Richard was presented with the award at the New Zealand Export Awards last week. Export Year 2007 Honorary Awards were presented to four people, to recognise and celebrate the significant and long-term contributions they have made to New Zealand’s export sector.

That’s it for now – be sure to check out our Fan site, www.wetaholics.com for daily updates as they happen. If you have any feedback or suggestions, please feel free to contact our friendly Customer Services team on info@wetanz.co.nz and drop us a line.