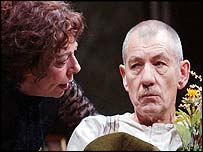 Ian McKellen in ‘Dance of Death’

Sir Ian McKellen, one of Britain’s finest stage actors, has made a triumphant return to London’s West End. The actor, who is also famed for his role as wizard Gandalf in The Lord of the Rings films, starred in Dance of Death by August Strindberg at the Lyric Theatre. [More]