Well, its been a pretty busy Lord Of The Rings Day for yours truly. I took the Lynx ferry from Picton to Wellington and hooked up with my good buddy Big Geoff before heading to the Te Papa museum. As far as museums go Te Papa is on the cutting edge and a Lord Of The Rings exhibition makes a must see attraction.

No cameras allowed in ( no surprise there) but no reason to not get a quick piccy in the foyer to remind me in years to come that I was actually there. And no, the Argonath is not to scale – I am not as tall as Morgoth, not even on tip toes!

The exhibition is on the 4th floor and covers about the area of a large basketball court. Items of interest are arranged in cocentric circles moving out from the middle of the room – in the center is a dimly lit room with the One Ring suspended in a column which runs from floor to ceiling. The walls feature a band of fire around at about chest height which casts an ornage glow across the display. Fiery runes move across the floor ins spinning fashion and an eeie glow lights the column. A very cool effect and one that truly reflects the majesty of the golden band contained within.

Circling the outside walls of this chamber are displays featuring Sauron in his 2nd age suit of armour and weilding his mace (set against a frieze of Baradur), a statue of the Cave Troll (not life size but rather large), including a Moria Orc and various backgrounds and props from the Chamber Of Marzubal sequence. There is also a wall featuring pictures of Gollum and also a screen showing various video clips about bringing him to life on the screen.

These videos are a common theme throughout the exhibit and generally feature one or more short documentaries concerning different aspects of the film making.

There are a large number of armour and costume displays and those of the main characters have pictures and pertinent information featured with them.

There is a wall which provides examples of the various swords used by the Elves in the Last Alliance and the horsemen of Rohan. There are 3 examples of each and you are invited to examine/touch each sword and guess if it was used in the choreographed fight scenes, for purely ornamental use, or by extras in the background where the look of the sword was the only important consideration.

A large green screen is accompanied by two different mockups of Gandalfs’ cart and multiple video cameras – this allows two people to be shot using the forced perspective method used in the films – very cool. But don’t wear a green shirt or, like one chap, your shirt will be completely see-through and you will appear on camera as a disembodied head and two arms!

The minatures on display of Isengard and the Bywater Mill (fom Frodo’s vision in Lothlorien) are seriously impressive and you can sense the countless hours and blood sweat and tears that went into creating these pieces.

Speaking of which, Boromir is truly scary and you would swear it was actually Sean Bean lying in the grey boat waiting to be dispatched over the Falls Of Rauros. For me this was the highlight of the display and goes to show that you don’t always need a computer effect – a physical mockup or minature adds an extra degree of realism; CGI is nice but should be used only when neceassary in my view…

The main feeling you take away from all of the displays is that someone has put an incredible amount of work into creating the world of Middle Earth for the big screen and we are so very lucky that these committed souls have succeeded in capturing Peter’s vision perfectly.

The exhibition is a very good reason to part with $12NZ and I urge anyone in the Wellington area to see it before it departs for the rest of the world. 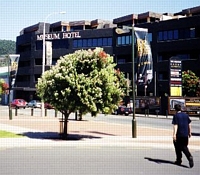 Outside Te Papa it is still a bright and blustery day in the capital. One thing you notice immediately is that nearly every second lamp post or power pole in the central city has a Lord Of The Rings banner adorning it – this town loves the movies and their creator and is not afraid to show the world!

It is a short walk to The Embassy theatre and as we round a street corner ahead of us we see Gollum peering over it’s roof trying to get his hand to the One Ring which spins lazily over the theatre entrance.

When Weta Workshop had time to turn this out I don’t know but the time involved and budget was surely not insignificant. It was definitly worth it – theres nothing like the twisted form of a malnourished and time-ravaged hobbit to wake up the rather tame skyline of the city…

He literally is quite massive and you wonder just where he might end up once the movie finishes (god forbid) its run here. My vote is the top of the Beehive (home of our beloved ministers of parliament) building so the politicians have a constant reminder that they work for us and should constantly fight their all-consuming lust for power… 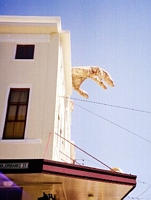 Five hours later and it is back to The Embassy to see The Two Towers (my second viewing). Whilst the foyer of the theatre has been restored, th actual cinema itself can be best described as “run down”. The only improvement here is the sound system and after managing to resist the temptation of buying copius bottles of Shadowfax Chardonnay Big geoff and I take our seats and prepare to be aurally and visually assaulted – in a good way.

Alas it is not to be for a good while as after a few trailershave run the house lights come up and a lengthy pause suggests there is a bit of a technical hitch in progress. It is confirmed by staff a short time later and it is noot until an hour has passed that the film rolls and the Wingnut Films logo is greated with great applause. And how loud was it! The volume was just short of deafening and coupled with teh fact the Embassy screen is rather large meant that the vfilm was definitly worth waiting for.

On second look the film is just as stunning as the first viewing. I noticed the flaming Ent dousing himself in the floods of Isengard (I missed it the first time) and confirmed that the spear wielder at the gate of Helm’s Deep was in fact Peter Jackson himself. And the new plot twist of Faramir continuing to show the weakness of the race of men and then setting Frodo free after hearing Sam’s speech is entirely believeable and congruent with Jackson’s theatrical take on the masterpiece. Insert rebuttle here…

All in all a great day in Wellington and an experience I will treasure for a long time. Now, my conscience is niggling me again, should I return Sauronsmace to the exhibition or not…