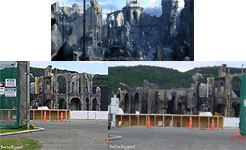 I was just looking through some of my old TORN pictures, spy shots of burnt ruins everyone thought were Minas Tirith. But I’ve just realized that buildings are actually part of Osgiliath. The frame-by-frame commentary on the official movie site shows a picture of almost identical ruins with a caption saying that Faramir takes Frodo here, to Osgiliath!

Isn’t it funny that we only got a glimpse of the uined city in the trailer – but TORN had a full-on overhead shot two years or more ago?

I’m enclosing copies of four spy photos from TORN and a screen capture from the newest trailer so you can see for yourself. Hope this’ll get me “super spy” billing on the front page of TORN. ;-P