Thanka to Nevlonde, Ian and Yavie for all these news and picture! 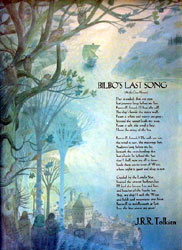 Original
poster of bilbo’s last song from the 70s

News thanks to Nevlonde: “Hi. Just read the e-mail about Bilbo’s Last Song. Don’t know if you know that the poem was set to music by Donald Swann in his compilation of songs that were poems in LOTR. The songbook is entitled THE ROAD GOES EVER ON: A Song Cycle. Music by Donald Swann; Poems by J.R.R. Tolkien. I have the 2nd edition, published in 1978. It is now out of print, but the song is just beautiful. For years I have played it and cried every time, picturing Bilbo leaving Middle Earth. There was an old recording of the songs on, (a Record, if you know what that is!). I don’t have it but had borrowed it from the library. Swann played and sang the songs and that’s how I learned them.

There are some volumes for sale on-line, but there’re not cheap. But his music is really good and the songs were approved by Tolkien. There’s a nice introduction to the music book, explaining how Swann came to write the melodies and that Tolkien approved all, but had him revise the music for “Namarie.” Tolkien hummed what was a Gregorian chant and Swann basically used that with a bit added by Swann. Thought this might be interesting to you. “

And Ian ads this:

The BBC recording of the radio series, originally broadcast 21 years ago, featured this poem spoken over music as part of the finale of the radio dramatisation, but it was not included on the separately released soundtrack album by Stephen Oliver. John Le Mesurier. who played the part of Bilbo, was not really a singer and although the original radio adapter Brian Sibley and director Jane Morgan, loved his “sung” version Tolkien’s secretary didn’t – and she would not give permission for the “sung” version to be included in the radio series. As a result it was re-recorded as a spoken piece over the music that was broadcast as part of the serial but never included on the musical soundtrack album.

Last year, with the expiration of copyright I believe, the BBC were able to broadcast the “sung” version on a documentary on Tolkien by Brian Sibley, which to everyone I know who’s heard is far more poignant than the spoken word version. The fact that Le Mesurier is not a great singer only adds to its charm. When the BBC released new CD recordings of the radio series earlier this year (to include new intro’s and outro’s recorded earlier this year by Ian Holm – the movie’s Bilbo, but the radio series’ Frodo) they included the musical soundtrack CD with this extra new version added.