From the folks at Elbakin.com:

Take a look at some info on Le Grand Rex: 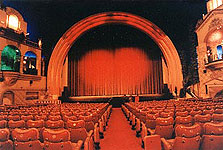 The Grand Rex was born in 1932. It is the last historic movie palace still open in Paris with the original auditorium. It is by far the largest auditorium in Paris, the only one over one thousand seats, ahead of the eight hundred seats of theater 3 of the Paramount Opera, and theaters 1 of the Normandie and the Bretagne. 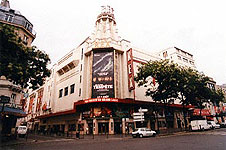 The Main screen is 16.90m (55ft) wide; all the width is used, only the height varies, from 745m (24ft) for cinemascope to 8.45m (28ft) in 1.85. Although these sizes are more than decent, it is a pity than the picture is smaller in cinemascope than in 1.85 (on the Champs-Elysées, the UGC Normandie used to have the same problem). This screen probably is the largest flat screen in Paris.