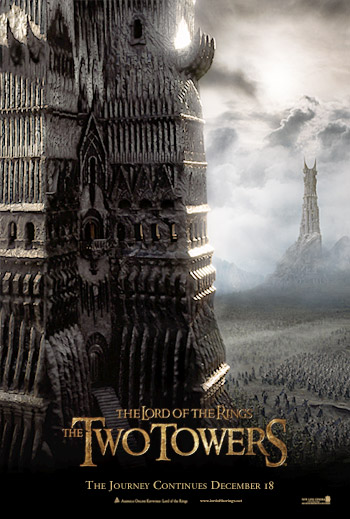 The sequel to the Golden Globe-nominated and AFI Award-winning The Lord of the Rings: The Fellowship of the Ring, which grossed $350 million worldwide in its first two weeks of release, The Two Towers follows the continuing quest of Frodo Baggins (Elijah Wood) and the Fellowship that has joined together to destroy the One Ring and stand against the evil of the dark lord Sauron. The Lord of the Rings: The Two Towers stars (in alphabetical order) Sean Astin, Cate Blanchett, Orlando Bloom, Billy Boyd, Ian Holm, Christopher Lee, Ian McKellen, Dominic Monaghan, Viggo Mortensen, John Rhys-Davies, Andy Serkis, Liv Tyler, Hugo Weaving and Elijah Wood. The film is produced by Barrie M. Osborne and Peter Jackson, Fran Walsh and Tim Sanders. The screenplay is by Fran Walsh, Philippa Boyens, and Jackson based on the book by J.R.R. Tolkien. The Two Towers is in theaters everywhere on December 18th, 2002. [More]