Ringer Spy Taniwha sends along these great pics from the StoneStreet Studio backlot! While I still need to do some digging to see what this odd set may actually be….Check out Taniwha’s report! 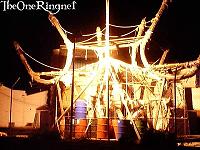 I was standing on Jervois Quay (near the BP opposite Frank Kitts Park) at about 1:15 this morning when two trucks when ripping past with what could only have been an ENT on the back.

I hopped in my car and tried to follow them, assuming they were heading for Miramar; but they got a good head start on me and disappeared. (I was with quite a few other people, all of whom saw the same thing and drew the same conclusion…that it was Treebeard.)

I drove by Stone St Studios to see if I could catch another glimpse of the truck, no luck, but what I did find quite by accident was the remains of the Oliphant seen in the Evening Post photo from Queen Elizabeth Park; it’s just the skeletal structure, out on the back lot surrounded by shipping containers, but if you drive up the wrong street you’re basically next to it.