Has anyone mentioned to you that they’re shooting again? Little ‘JAMB’ arrows are springing up around Wellington (on the waterfront near Centreport, for example)…I’ve heard some fighting elves were needed recently at Helm’s Deep, too…

Some more information is slowly making its way to my ears.

Some of the filming in Wellington is taking place in Centreport, one of the major business ports in Wellington. 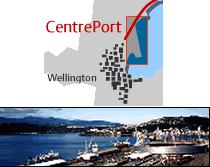 Filming is believed to have started yesterday (Monday), no news on what is being filmed, or who was there.

The current temperature and weather conditions at the port are: