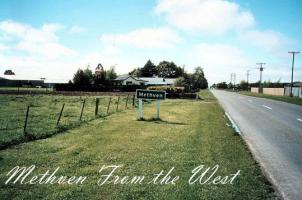 The trip to Methven was not a long one. We sped across the rich fertile Canterbury Plains and arrived at our destination to find the townspeople slumbering in their beds. First port of call was to book in at what would be our lodgings for the coming evening.

As we carried our luggage in the proprietor asked us if we were “skiers or boarders?”. Mumbling something unintelligible under our breath we shuffled off to our rooms. 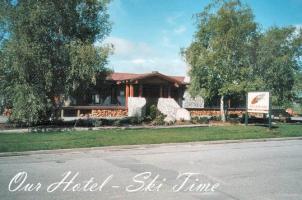 Immediate exploration was out of the question (we soon discovered) as the lack of a good nights sleep, plus the rigours of our early morning adventure had drained us quite considerably. A nap was called for before we embarked on our next voyage of discovery.

Around noon we awakened and slipped into the bustling metropolis that is Methven. We immediately happened upon the town hall which was being used as the film unit’s base of operations, but all was quiet – obviously the Edoras filming was in full swing. The rest of the town was completely devoid of any obvious movie connections so after a while we returned to our hotel for a spot of lunch. It was during lunch that I realised I was totally unprepared if we actually ran into any celebrities! Sure, we had a camera but had I remembered to bring a copy of the book (or anything) to be signed? No! 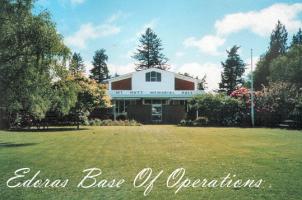 Back to town we sped, my offsider had his trusty dog-eared copy of LOTR but I had to settle for buying anew copy of The Return Of The King. For obvious reasons the Methven bookstore was sold out of all other versions!

It was now 2:30PM so we adjourned to one of the local watering holes to watch Canterbury play Waikato at Rugby Union (Edoras vs. The Shire). Up for grabs was the coveted Ranfurly Shield, the prize of all prizes as far as New Zealand Rugby is concerned. The town came to a standstill and there was much yelling and consuming of beer for 2 hours. Much to my annoyance Canterbury lifted the shield from Waikato and much celebration ensued. NB There are two main public drinking establishments (pubs) in Methven. Their names are Blue Pub and Brown Pub. And yes, because one is painted blue and the other is painted brown! Ah, the quaint hamlets of Canterbury and their imaginative population… good thing they can play rugby! 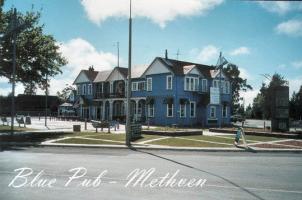 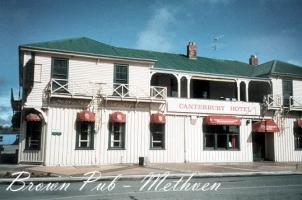 The day had taken it’s toll on us (with the help of not a small number of mugs of ale) and so again we returned to our hotel for a nap. We were not used to getting up at the crack of dawn (doom) obviously! We rose for a late dinner and then proceeded into town in search of the wild celebrity nightlife we had been primed for.

We were sorely disappointed. After traipsing around the places to be seen (at night in Methven) we came up very short. Not one sighting of anything even vaguely resembling the huge production that is The Fellowship Of The Ring. We were dejected and gloomy but all was not lost – we had not stumbled into the midst of the production but we had had a lot of time to sample more of the local brew. By the time we returned to our hotel it was nearly the witching hour and we were (to put not to finer point on it) rather cut!

We decided to drown our sorrows further at the hotel bar and sought comfort from our old friend Jack (Daniels). A wee while later, as we got closer to the floor, the barman asked us why we were moping around here when we could have been at the party next door…